I recently experienced the anxiety autistics and their parents sometimes face when confronted with law enforcement (albeit on a small scale) due to a lack of autism awareness. It reminded me of my neurotypical privilege in yet another aspect of life. 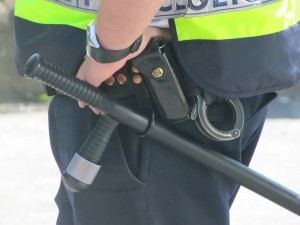 My son is fascinated with maps and geography and has always wanted to travel to other countries. When he was four, he could draw and label the entire United States as well as several other countries (His drawings have always kept the families behind us in church entertained!)

We decided to plan our first trip outside of the United States to satisfy his desire to travel. When he saw how close we lived to Canada, he became interested in visiting there, and would talk about it constantly. We live in northern Indiana, so Windsor, via the Detroit/Windsor tunnel is the closest border. He talked about going to Canada to everyone he knew: his relatives, teachers, therapists, gymnastics instructor, piano teacher, etc.

When my husband and I finally received our passports, we booked a hotel and started planning for a trip to Windsor that weekend (which happened to be the same weekend as the Detroit Auto Show­– an added bonus). We also noticed online that there was an indoor water park in downtown Windsor a few blocks from our hotel, and we decided our Canada trip was going to be awesome!

On Saturday we attended the auto show, bought our son a Goodwill Canada t-shirt and hat, checked into our hotel, and spent the evening at the indoor waterpark. The next morning we made sure to stop at a Tim Horton’s donut shop for breakfast and saved some Canadian currency to put in a scrapbook.

On the way back into the United States, we encountered an extremely rude customs officer, whom I can only assume had either just seen a stream of vehicles smuggling illegal goods back into the states or was bored from the lack of border traffic on a Sunday morning and wanted to pass the time by being extra thorough. We had been warned that the customs process would take longer on our return trip, but we weren’t prepared for the intimidation.

No matter how we tried to comply with each of his demands, he only grew angrier. We were opening the “wrong” doors and not answering fast enough for him. He frightened us into admitting we had leftover pizza and half-eaten donuts stored in our cooler (not what he meant when he asked about food we may have brought back). Then he grew angrier when we tried to explain what we were doing in Canada:

“We were just tourists for the weekend,” my husband explained.

“Are you trying to tell me you came all the way from Indiana just to be tourists for the weekend?” The officer wasn’t buying it.

“Yes, my son really wanted to go.” Because all the doors were open, my husband prompted our son to tell the officer why we wanted to go to Canada. He just stared at him. The officer stared back, growing angrier with the silence.

“You expect me to believe you came all the way from Indiana just for the night?”

“Yes, my son really wanted to go,” my husband repeated. At that point I wondered if we should offer an autism awareness lesson: explain that my son was autistic, that he loved maps, and had been fixated on visiting here for a while now because of the novelty of seeing a new country. But then, my husband added, “And we went to the Detroit auto show.”

That was enough. The officer nodded his understanding. It made sense for someone to drive from Indiana to Detroit to see a bunch of expensive cars on display and then cross the border to Canada for the night, but not for Windsor to be anyone’s primary vacation destination.

Does a Lack of Autism Awareness Make Disclosure More Necessary?

This incident reminded me of the issue of disclosure for autistics. When is it appropriate to tell someone about a diagnosis? How does one learn to advocate? And how can a lack of autism awareness among law enforcement impact the autistic community?

This is a topic of interest to Lydia Brown, a law student and autistic rights advocate. While she was in high school, she convinced Massachusetts legislature members to propose a bill requiring that law enforcement officers learn about the effects of autism. This is important because some autistic behavior may be misinterpreted as rebellion. If an autistic person runs from an officer out of fear and refuses to stop when asked to, the officer may use force to subdue him.

Brown also told a reporter from Georgetown University (where she attends college), “If a police officer were being sarcastic, I would not know. And if the officer did not realize that I wasn’t picking up on the sarcasm, the officer would just think I was being defiant.” She currently advocates for autism training that “will teach officers appropriate de-escalation techniques for developmentally disabled people.”

Actress Holly Robinson Peete has also written about a similar fear she has for her son, who is 18. In an article for The Huffington Post, she writes about how her son loves sensation of a hooded sweatshirt pulled over his head and his hands tucked in his pockets. After the Trayvon Martin killing, this habit caused her new anxiety. She writes:

“I had this awful recurring nightmare that my son was walking to Coffee Bean at the wrong time in the rain, hoodie on, and was topped and frisked by police but couldn’t respond to the social cues fast enough. A request to “slowly” remove his hands from his beloved pockets panicked him and the situation escalated.”

She took her son to the local police department to introduce him to the officers, improve autism awareness in her community and ensure they understood his specific tendencies.

While autism awareness isn’t the end goal of advocates, it’s certainly an important first step for the health of our society. Many law enforcement officers have to make life and death decisions based on what they view as typical behavior, so enhancing autism awareness education especially for these professionals is an important pursuit. Many agencies are prioritizing this effort, and making personal introductions to law enforcement whenever possible may also be useful. Autism awareness training probably won’t change the attitude of our customs officer, but perhaps it will save the lives of others in more critical predicaments.