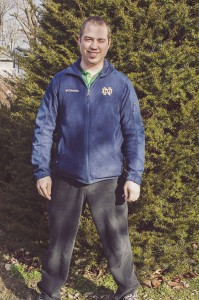 Ben is twenty-seven and works for the University of Notre Dame as an Event Setup Supervisor at the campus hotel. He considers obtaining this position one of his major life accomplishments. I recently spoke with Ben about autism advocacy and his experience growing up on the spectrum.

1. What mistakes do autism advocates make?

2. How have you had to advocate for yourself, either in the classroom or the workplace?

In school, I was blessed with parents who advocated for me and told my teachers exactly what I needed. But in the work environment of my former job, at an end-of-year review, there was a lot of stuff brought up about past situations where they would say one thing but mean another. They would tell me “When we say that, we really mean this,” and it was hard for me to really understand what they were trying to say because I’m a very “yes/no,” “black/white” person. I need that straight-cut answer. So I had to tell him that “I have Asperger’s, and you need to spell out what you want done and exactly how I should go about getting it done in order to train me properly.”

I wish more parents of autistic children knew how extensive it is. When I was growing up and first diagnosed (in eighth grade), my parents told me that I was fine and that I was different just like everyone else was different, but I didn’t realize how many people were on the spectrum. I wish more parents knew how broad the spectrum is and what they could do to improve their kids’ lives. It’s good to recognize the early signs so they can help earlier and save their kids some stress.

4. I wish more parents of autistic children would…

I wish more parents of autistic children would take a more active role in their child’s life, getting involved in the school like my parents were. If I didn’t have parents who were so involved, I would not be as well off as I am today. You can’t be afraid to fight for and protect your children or intervene if something isn’t working.

5. Have you ever felt discriminated against because you are autistic?

I was the victim of a lot of bullying in school. I understand fully what their pain is. I don’t feel discriminated against anymore, but when a doctor or another person refers to me as being on the “high-functioning” end of the spectrum, that doesn’t really make sense to me. Does that mean that I’m almost “normal?” What pops into my head is “There’s Ben, he’s that dot right there!” Like they’re graphing the whole thing. I don’t really understand what they are basing their decision on. What is normal? Do people think it is a compliment to be considered “high-functioning”? Growing up I knew I needed different things from my teachers, but I knew that everyone has their own way of doing things, and that’s fine.

6. Anything else you’d like to say to the readers of this blog?

If you are a parent or caregiver of an autistic child and the child is not old enough to fight for themselves, you need to stand up and fight for them– be their support. It will take some sacrifice, but hopefully when your child grows up they will appreciate how you’ve helped them.

If you are an autistic adult, I would tell you to just be yourself. You may be quirky or act a little different, but you can’t stop who you are. Just embrace it. I am happy for who I am. I get a lot of compliments about things I do well, and it’s nice because I do those things well because that is who I am, and yes, I have my faults and things I don’t do so well in, and I may be a little quirky and sometimes people say I’m acting a “little out of control,” but you can change a lot of people’s negative thinking if you just be yourself. Everyone talks about wanting to cure autism and speaking about it as if it’s a negative thing, but it’s not bad, it just means you’re a little different. I think the best way to deal with that is to just be yourself.