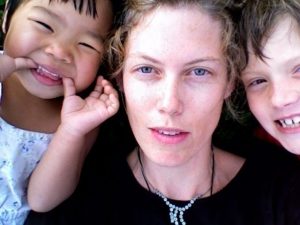 Jennifer Elizabeth Brunton, Ph.D., is a writer, editor, former ethics professor, and author of the blog Full Spectrum Mama where she writes about her experience as an autistic mother raising two children, one of whom is also on the autism spectrum. This week she shared information about a new book she is working on and offered some wonderful reminders for neurotypical parents trying to raise their autistic children in the most positive and supportive environment possible.

What is one thing you’ve noticed neurotypical parents of children on the spectrum don’t understand about autism?

Hmmm…One thing? Maybe just that a different brain is not an inferior brain.
Here’s one example: my neurology responds violently and immediately to some artificial odors. I can get a vomiting migraine from smelling certain candles, air fresheners, perfumes, or cleaning products for even a few seconds. Does this make me weak and inferior? Well, it is inconvenient! But I actually think I am sort of a canary in a coal mine. I think those scents are probably not good for anybody’s brain…
Another example in this vein: a lot of neurotypical people, including parents, see black and white thinking as a problem or weakness and try to decrease it, while I – and I taught college-level ethics for a decade –  would argue that it actually often functions to make those of us on the spectrum who think in these ways highly, highly ethical, willing to endure the inconveniences that others may avoid or excuse by resorting to “grey areas” (examples of this might be high rates of vegetarianism or the lack of willingness to “use” others to get ahead…).
And to sort of turn this question around: I think people on the spectrum, including children, often feel that labels and diagnoses are used against us when maybe the people who seem to be doing so don’t intend to be that way. We all need to make sure we very clearly and intentionally use language and labels for understanding, rather than judgment. My mother always says she wishes she’d known what was going on with me as a child because she found it very hard to connect with me and I seemed to be “in my own world;”  if she’d known about neurodiversity, she could have come up with strategies for acceptance and understanding…As a consequence of this lack of knowledge and communication, I know I – like very many neurodiverse people – often felt that she (and others) wished I had been born “normal.” This is something, as I address below, that is no longer necessary with our contemporary knowledge and awareness.
Similarly, if you do choose to try to address certain differences, absolutely do let your child or loved one know that any ideas about changes, modifications, accommodations, or therapies come from a place of enhancing their life, not “correcting” them.

Your website mentions that your blog is being turned into a book. How will it be organized? What is the book’s primary purpose?

The book is still in the planning stages as I’ve been inundated with editing work, but it will be organized into chapters that reflect its primary purpose which is, I think, basically to offer some examples of how we squeezed hope and success and acceptance and even laughter out of some less-than-ideal circumstances.
I also have a daughter who is allistic and has behavioral issues because of having been adopted and suffering from an attachment disorder. She is basically the stereotypical opposite of stereotypical people on the spectrum: super savvy, manipulative, not particularly attached to being truthful, tuned in to how she can ‘win” every situation, attuned to social nuance, extremely ambitious, oriented toward fitting in and normalcy, calculating…She is the master of every social situation she finds herself in. Also, she’s completely not “sensitive,” emotionally or physically. She’s like a tank. A lot of what I address in my writing is what parenting these two extremely different kids looks like – and what I have learned from them. My idea was always that if something works for us, it should work for just about anybody because my kids are REALLY different from each other. I will also share in the book stuff about our “disastrophes” and funny stuff as well, as I do in the blog. And in both (book and blog) I do reference scientific and philosophical developments, as well as social issues and changes, because I like to use my academic background to make these subjects accessible and implementable.
As for basic organization, the chapters will be designed to address the main “stuff” that people and parents deal with, including acceptance, advocacy and self-advocacy, school topics, social possibilities…

The biggest one it seems to me is speaking for autistic people. Very few of us are 100% unable to communicate in some fashion and, trust me, we all have plenty to say. If a neurotypical person has ZERO IDEA what it feels like to be neurodiverse how can they be in charge of designing spaces, educational materials, etc. for someone whose brain responds very differently from theirs in ways they might not even be able to fathom? At the very least, neurotypical people advocating for or involved with neurodiverse people should really, truly listen to them — and believe them. Then act/advocate/design/scaffold/step away accordingly…
Here’s a universal issue: generalizing. Parents, teachers, helpers, therapists: make sure you are really addressing the person in front of you! We are all different. If you’ve read or heard something, let’s say that “autistic people don’t have empathy” (a huge pet peeve misunderstanding of mine, because what some of us DO lack is the ability to easily discern how people feel, or process their responses quickly or easily, but I have NEVER met an autistic person who didn’t care – deeply – once they understood…), investigate for yourself whether the unique individual in your life actually lacks empathy!
And this isn’t really the case with many parents I’ve met, but I have seen it in school programs, including programs which train people to work with people on the spectrum, but I do see people looking at autistic people as, how can I say this…almost as study subjects/specimens more than people. My son was in a social group at a local university and I hadn’t read the fine print and there were a whole bunch of people watching the kids from behind a one-way mirror, and I was like, “DO THE KIDS KNOW ABOUT THIS?” And they DIDN’T. You can be sure I took him out of there…And actually that was when – in  a desperate bid to have some social interaction going on – I found my now best friend and her son, who is on the spectrum and my son’s best friend. We make our own (albeit a little bit nerdy, maybe…) “social group.”

On your website, you explain that “one of the greatest things to come out of the neurodiversity movement(s) is this idea that the ideas and thought patterns of divergent neurologies may be equally valid and in some cases superior.” Do you have examples of how/where you see this changing?

Oh, all over the place! In the swarms of neurodiverse blogs and books and various online and RL communities. From this abundance alone, awareness and acceptance are growing. And respect. It’s like the way in which having more than one ear piercing or blue hair made you a “freak” when I was a teen and now they are “normal.” It’s that familiarity, along with the awareness that different neurologies bring different gifts, such as intense focus or ultra-in-depth knowledge…
When I was a young, “different,” female person, the only thing I found that spoke to me was the book Nobody Nowhere; now we see Temple Grandin on mass market bookshelves…Neurotribes is a fabulous resource, albeit one written by an allistic person. I should make a list!! A quick web search shows zillions of websites and communities advocating for autism awareness and acceptance…We still have a long way to go, though, so let’s keep up the good work!

How can individuals (both on and off the spectrum) promote the furthering of this benefit of the neurodiversity movement that you describe above?

Just keep putting ourselves out there, however we feel comfortable – writing, speaking, marching…I have to say my son has been a great teacher to me about this: while I have always talked about the equality of all people and the unique strengths (as well as challenges) of neurodiverse individuals, there were ways early on in which I was trying to get him to “pass” (because I myself had such a hard time growing up “different”). He wasn’t having any of it! He’s very open about his wonderful self and never tries to act like everybody else. Because he’s also a fairly happy and confident guy, he’s won a lot of people over who might previously have used “autistic” as a slur or might never have met an autistic person. So I think the secret lies partly or even mostly in CONNECTION.
Of course sometimes we get discouraged, so that’s when learning more about our unique neurologies can be even more helpful: what do YOU need to recharge so you can be part of this progress?

What are the most important things you are doing for your neurodiverse son to help him develop a positive autistic identity?

One of the main things definitely stems from being neurodiverse myself. I discuss obstacles I’ve faced as well as identify areas of success. I’ve also shared lots of biographies of successful and amazing people on the spectrum (for example, he loves Pokemon and the creator of Pokemon was on the spectrum).  We live in a fairly rural area but I’ve tried to find ways for him to participate – he also plays Magic: The Gathering and has played in local tournaments.
I’ve also tried to steer him toward classes and school activities that will support and nurture him and maybe help nudge him toward worlds where there are statistically more people on the spectrum – sciences, languages, technology… A dear friend of mine, and the most brilliant person I know, struggled early on with undiagnosed “differences” (of a “typical” Asperger’s-type). He is now a highly successful philosopher and public intellectual and I’ve always told my son about him and they are beginning to correspond.
That being said, I am also always trying to find a balance between supporting his interests and trying to help him develop skills for self-advocacy and (possible) independence. He tends to feel I am being critical when I push him to develop habits around things he doesn’t think are important, like hygiene or homework, so I work really hard in attempting to get him on track with these things without making him feel bad or diminishing his self-respect and values.
One thing all parents and friends of people on the spectrum can do is celebrate, love, accept their neurodiverse loved ones just as they are. Everybody – neurodiverse or neurotypical – can grow and do better if given a chance, but I think we are most likely to do so if we feel loved and have a foundation of confidence and security in the first place.