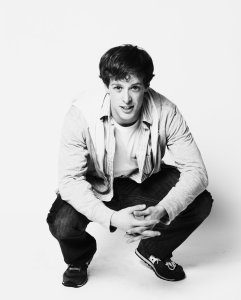 Mickey Rowe is the first autistic actor to play Christopher Boone in the Tony Award winning play The Curious Incident of the Dog in the Night-Time and one of the first autistic actors to play any autistic character. He has been featured in the New York Times, PBS, Teen Vogue, Playbill, NPR, CNN’S Great Big Story, Huffington Post and more. Mickey is also Artistic Director of Arts on the Waterfront, a high-quality free theater and arts program in downtown Seattle where many homeless community members live. This week he shared his experience working as an actor with The Indiana Repertory Theatre.

You are currently working with the Indiana Repertory Theatre (IRT) in Indianapolis. Did you grow up in Indiana? What brought you to Indianapolis?

I was born in and live in Seattle, WA. Janet Allen, the artistic director of Indiana Repertory Theatre brought me to Indy for the show. I love it! It is such a wonderful city!

Describe the process of obtaining your current role in “The Curious Incident of the Dog in Night-time.”

When Janet Allen knew that her season at IRT was going to include “Curious,” she knew she wanted to audition both autistic and neurotypical actors. She reached out to a NY organization called Alliance for Inclusion in the Arts for a list of autistic actors who might fit the bill that she could reach out to. My name was on her list, so she sent me some scenes and asked me to submit a video audition. I videotaped the scenes and sent them in. A few days later she asked if she could fly Risa Brainin, the director, to Seattle so I could meet with her and play with some of the scenes in person. I said, “Of course!” And after Risa and I met in person, I got the call offering me the part a few days later!

You’ve said in other interviews that you act in everyday life, so acting in your professional life is comfortable and routine. Where do you get your real-life cues to “act” certain ways in your everyday life?

I’m not sure. I think that as autistics, we are trying so hard everyday. And usually things don’t work out so well when it comes to more social interactions. When we find something that does work by chance, we definitely remember it and add it to our script, so if we are in a similar situation again, we can say the same thing again. That’s how I work.

You’ve written about how you’ve been successful in theatre because of the “scripted” nature of the performance; however, did having autism present any obstacles to obtaining the roles you’ve wanted in the past?

Absolutely! It is so hard for people on the spectrum to get any jobs, acting or otherwise, because so much of interviews and auditions is about the small talk and making the interviewer feel comfortable and confident. No matter how brilliant we are at the jobs we are interviewing for, we will always be much weaker than most at these specific interview skills, that may have nothing to do with the actual job we will be doing if we pass the interview.

Why is it important that individuals with autism play in roles that portray autistic characters?

Any time any minority community is being represented in stories, I believe it is that minority community’s right to represent themselves accurately. A lot of people disagree with me on that, but that’s what I believe. The point of storytelling is to connect us with people we otherwise wouldn’t come in contact with, to bring us life experiences we don’t all ready have. That is why diversity in the arts is so important. Inclusion in the arts matters because it directly leads to acceptance and inclusion in life.

I also get to show all the business leaders who are in the audience seeing me act that you can hire people with disabilities! We can get the job done at the highest level! Look, IRT did it! You can too!

Does having autism offer you advantages in your roles as father, husband, and professional actor? Disadvantages? Or do you see your autism as neutral in these areas/having little or no effect?

I think that my autism definitely poses challenges in my role as a husband/father/etc. because it leads to so many miscommunication and communication errors and missteps. There are also a lot of executive functioning skills that are more challenging with autism, like grocery shopping, paying bills, etc. Professional acting is the one place in my life where I think my autism can be an advantage if/when I play my cards correctly.