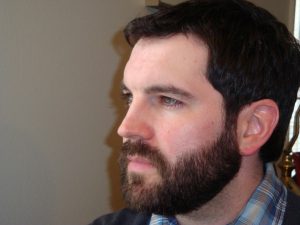 Last week author and Associate Professor Daniel Bowman Jr. shared some of his personal experiences as a professor and poet on the autism spectrum. This week continues that interview with practical solutions for individuals making earnest attempts to connect with the autistic community and advocate for autism acceptance.

You’ve written in an article for Ruminate that it’s hard to relax in social situations. Are there ways that others around you can behave that might help lessen this anxiety?

Autism makes it hard to negotiate certain kinds of social circumstances, like attending an event with a lot of people, or a smaller gathering with at least some people one doesn’t know. Other times, a gathering even of close friends can become stressful if something unexpected occurs, like someone suddenly decides in the middle of a party, okay now we’re going to sing songs, or play a board game or whatever. I don’t like sudden changes in expectations. I will often panic. So it’s helpful to know about them earlier: “Hey, just so everyone knows, we were thinking about playing guitars later on, after dinner.” Then I can adjust.

Another thing that’s helpful is to be clear during conversation. In response to a question like, “Should we play a board game now?” an allistic person might say, “Um, yeah, I mean, like, we totally could do that, I guess.” And you’re supposed to understand that, pretty much, no, that person is not enthused about the prospects of a board game. But I may be too stressed, or more likely my senses may be too overloaded, to pick up on the meaning of the nonverbal signals and evasive answer. I generally wish to hear just a yes or no so it’s clear where people stand.

I’ve talked about this before, too, but I’ll say it again: please include autistic people in the conversation, in the emotion of the exchange, even if they can’t sustain eye contact. I get dropped in a hot second during conversations all the time, even among close friends, because to their minds I’m not sufficiently reciprocating their emotion, not connecting with them and with what they’re saying. So it’s almost like their brains send a signal, “Well, he’s clearly not paying attention here, so I’ll put my focus exclusively on the other people at the table.” And they never look at me again. Then I really do tune out, and often walk away, because I’m being left out at that point. Sometimes I can make eye contact and nod my head along; other times I can’t. It doesn’t mean I don’t want to connect and be part of the conversation.

Lastly, I would ask people to learn something about autism. I’m often surprised by the lack of curiosity apparent in the general public. I realize that life is busy and there’s too much to know and none of us can become experts in everything. But I do think everyone could and should read a basic article or two on something as important as the autism spectrum.

I wrote more about some of these issues in a Q & A with a friend that was published at Ruminate.

The number one mistake, I think, is not listening to autistic people.

This can take a lot of forms: among the worst, maybe, is people exploiting their autistic children, co-opting their stories for personal gain, in the name of “advocacy.” We’ve seen a lot of this.

Don’t tell stories that aren’t yours to tell. It’s okay for parents to share their experiences, but where it goes off the rails for me is when they more or less pretend that they get it. They don’t. They can’t. On Twitter these days, we call it the #ownvoices movement. If I want to read fiction about the Igbo people of Nigeria, I don’t read white people who aren’t from there. I read Chinua Achebe or another #ownvoices writer. I hope that people someday afford the same status to autism—that they’ll seek out our stories first and foremost. As we say: “Nothing about us without us.” Yet critics dole out accolades quite regularly to allistic people attempting to write the autistic experience.

I am not a “person with autism” any more than a tall person is a “person with tallness.” Neither of us can leave behind those identities in any core, comprehensive sense when we walk out the door. And yet I’ve seen, too many times to count, an allistic person on a discussion board or in the comment section of an article (I know, never read the comments) actually attempt to correct an autistic person using identity-first language. Part of this is because of some of the big corporate autism “awareness” organizations, who historically have not listened to autistic adults at all.

What is one thing your parents, a relative, or teacher did for you that helped you feel self-confident and accepted?

Well, I never had a diagnosis when I was young—this is all very recent—so things my parents or teachers did that helped were probably just good practices in general, not specifically geared toward autism. Insofar as I can reimagine the past at all, I do tend to see it anew through this lens of autism, and reinvigorate it with meaning—with textures and contours that I could never have perceived at the time.

I will say this: in education as in life, I have always responded terribly to authoritarians and very well to those who treated me with, to use an old-fashioned word, tenderness.

I had a 5th grade teacher who came down very hard on anyone who was, even for a moment, disorganized. He was from the old school, and demanded immediate obedience. One time he walked over to my desk—now, I’m a shy and awkward little 10-year-old and he’s a middle-aged man with gray hair and a beard, okay—and he, without saying a word, slammed my entire desk to the floor with one fell swoop, where it crashed so hard I thought someone had shot me in the head with a rifle. All my worldly belongings spilled everywhere, and the sensory overload along with the public humiliation and utter disorientation combined to form one of the worst experiences of my entire childhood.

According to his ethos, he thought he was teaching me a lesson—that I would clean out my desk and organize my papers and books and jump right the hell on the straight and narrow, and certainly thank him for it somewhere down the line, if not sooner. Instead, what he accomplished was bullying and scaring the living hell out of a deeply sensitive child who would forever hate the man’s guts, a child who learned in that moment to distrust on principle all teachers and by extension, all authority figures, and would think himself unworthy of love and kindness for years after. I was a little runt of an autistic ten-year-old, and now my shoulders and head drooped even more than one would have thought possible. You could’ve knocked me over with a feather.

On the positive side, when someone has treated me with tenderness—when an educator or other persona made even the slightest attempt to understand me or even just give me the benefit of the doubt (and I have always had some teachers like that), I’ve been fiercely loyal to them. Actual learning can take place then. Gentleness, kindness, sensitivity to the fact that the experience of another person may render that person’s way of being in the world completely different from your own…that’s what I respond to.