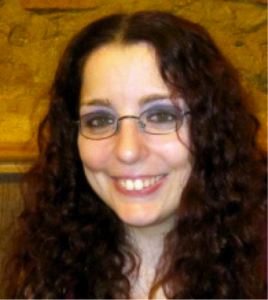 Amy Gravino is a Certified Autism Specialist, author, autism consultant, and public speaker. She runs a private consulting business in New Jersey called A.S.C.O.T. Coaching. She is an autism consultant and college coach for individuals on the spectrum and also advocates for autistics through her work as a member of Autism Speaks’ Awareness Committee and the Self-Advocate Advisory Board for the Daniel Jordan Fiddle Foundation. Amy speaks regularly about autism and sexuality and has written a book relevant to this under-addressed topic, a memoir titled The Naughty Autie. Below, Amy discusses her book and some of the major issues related to sexuality that autistic teens and adults face.

Can you tell us about the book you are working on?

Sure! The book is called The Naughty Autie, and it is a memoir of my experiences with dating, relationships, and sexuality as a woman on the autism spectrum. All too often, it seems like the differences between individuals on the spectrum and neurotypical people create division and hinder understanding, instead of helping it. So with my book, I am aiming to show that even though we are different, we also have a lot in common, and that women in particular—both on and off the spectrum—have a variety of shared experiences. I wanted to open my life and pain to the world, in the hope of showing others that they are not alone.

What have been some of the joys and struggles of the book-writing process?

I’ve been writing since I was 10 years old, and I’ve always found that it is much harder to write about yourself than a fictional character. For me, delving into what I’ve gone through with dating and relationships meant dredging up a lot of memories, and when I think about these things, I don’t just remember them…I remember how I felt when they happened. Which, of course, can be quite painful. But on the flip side, there is also catharsis, a relief that comes from getting all of this out and recognizing that, even though it might have been painful, I lived through it.

Can you talk about some of the most difficult issues related to sexuality you faced in your adolescence?

Probably the most challenging issue that I faced was not having any outlet for my burgeoning sexuality. I didn’t go out on dates or kiss a boy behind the bleachers in the football field or anything similarly cinematic. As I had turned to writing to cope with the bullying I endured in elementary school, so did I turn to writing again, this time in the form of erotic fiction. It helped me to explore ideas, feelings, actions that I could never have expressed or engaged in otherwise. And because I frequently wrote slash (male/male) stories, I was freed from the constraints of feeling like I had to fulfill a certain sexual role that I could not understand.

What issues do you currently struggle with? How have you learned to manage these struggles?

I often think about whether or not I will ever get married—that is, whether someone out there would want to actually marry me. But the issue with which I mainly struggle is trusting my own judgment. I waited to have sex until I thought I’d found absolutely the right person, the person that I fell in love with and thought also loved me, and in the end, I could not have been more wrong. Difficulty trusting men is one thing; difficulty trusting myself is another. I have been able to open myself up to someone new since then, and even though it didn’t work out, I was still okay. But when it comes to the long run, I am not sure that I trust myself enough yet to find someone who won’t hurt me somehow.

Where do you find the strength to open up about your personal life and the challenges you’ve faced (both in your book and your other advocacy work)?

I’ve always been a very honest, forthright person. I felt a tremendous amount of shame as a child for things I couldn’t control, things that were just part of who I am, and once I started to gain confidence in myself and my voice, it was as if a door had been flung open. Also, for me, writing was the place where I could be myself, and not have to hide who I was from the world, so if there is any place I have always been able to be open, it’s in my writing. I believe that being open is what helps others to feel safe and comfortable doing the same, so it’s both a privilege and a responsibility for me to be open in my work.

What are some of the most important sexuality issues people on the spectrum encounter?

Without question, one of the most important sexuality issues people on the spectrum face is neurotypical people (parents, therapists, professionals) believing that we don’t have sex and/or are not interested in sex. There is a persistent narrative that categorizes individuals with disabilities as being either completely asexual (that is, not interested in any sexual activity) or hypersexual (sexually promiscuous, deviant, out of control), and both of these are extremely damaging. People on the spectrum are often viewed as either entirely undesirable or fetishized/easily taken advantage of because of our vulnerability. Also, difficulties with understanding appropriateness and social boundaries, combined with reluctance on the part of parents and caregivers to discuss sexuality and provide much-needed information, can very often lead to folks on the spectrum entering the criminal justice system and being labeled as offenders, even though we are far more likely to be the victims of sexually-based crimes than the perpetrators.

How do these sexuality issues evolve as people on the spectrum age? What different issues do adolescents, people in their twenties-thirties, and those in their fifties face, for example? Or are they the same?

I think that the issues stay relatively the same, with one of the chief differences being that as individuals on the spectrum grow older, thoughts about marriage and potentially having children come into play. Some of us want to get married and have children, and some of us don’t. But regardless of what people with autism want, the problem of limited resources and outlets to express those desires is consistent, and if we are not given the opportunity to develop self-awareness, our sexuality becomes controlled and determined by others instead of ourselves.

What advice do you have for parents of autistic adolescents who are faced with the challenges you’ve just mentioned?

Whenever sexuality and autism is discussed, it seems to be framed in the context of safety (i.e., how do I keep my child safe, how do I prevent them from being taken advantage of and becoming a victim, and so on). But you can’t stop life from happening, and your child has to live in the world, as nasty and unpleasant as it can be. So the best thing you can do is empower your child, arm them with the knowledge and information they need so they can make the right decisions for themselves. Let them know that they can have a choice, that they have worth and value and don’t have to automatically go out with the first person who shows interest in them. Do not dismiss or minimize their desires, or make them feel ashamed of having them. Being on the spectrum, we are often deprived of this part of the human experience because it is uncomfortable for others, which in turn can cause us to feel ashamed for asking the questions to which we so desperately need answers. If you can ease that sense of guilt and self-blame by being someone we can openly talk to and trust, you will have made some part of lives that much easier and better.

What’s the most important thing a parent of an autistic teenager can do today to help promote healthy adolescent development?

Realize that your teenager is not just a collection of symptoms or a list of autism diagnostic criteria—they are also a teenager, with all of the raging hormones and physical and emotional changes to match. It’s entirely too easy to blame everything on autism, when much of what we go through is a truly typical teenage experience. Encourage independence and self-awareness by having us examine our own behavior and actions instead of shielding us from possible consequences. Above all, think of the person you want your child to be when you’re no longer here, no longer able to do things for them, and what you can do to help navigate challenges and successfully get to that point.