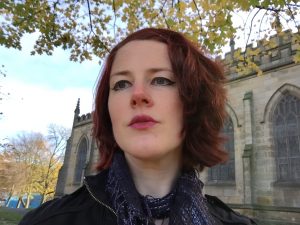 Anna Nibbs is an academic developer/educator, blogger, and married mother of two from the UK. She was recently diagnosed with autism, and her oldest daughter is also autistic. This week she shared some of her experiences as an autistic parent and offered advice for neurotypical parents of autistic children.

I’m not sure I’ve encountered any autistic people/people “with autism” who prefer person-first language (PFL) other than a small number of public speakers or figures, most of whom seem to have been diagnosed on the spectrum at a far younger age than many of the people I interact with. There have been the odd one or two I’ve seen on social media, but no-one I’ve really been in touch with personally. Perhaps it’s a trait among those of us who are late-diagnosed that we’re perhaps more likely to embrace the “label” – personally and/or politically – because we’ve had that sudden realisation and firm explanation of who we really are, after years of personal struggles.

For me, knowing I’m autistic is a positive thing. I find it incredibly odd that any autistic people would prefer the person-first format, but that’s entirely up to them. Perhaps this is more prevalent in the “anti-neurodiversity” world, where people are less happy about their autism, and less likely to view it in the context of the Social Model of Disability (of which personally I’m a big fan). As for figuring out preferences, to new audiences (of my writing, or when I’m speaking – e.g. when I’m teaching), I’m explicit and upfront about how I like people to refer to me. But if it’s not the right circumstances for making a “statement” about it, then personally, I’m happy for people to ask me outright. What I thoroughly dislike is people correcting me about how I refer to myself, although I don’t mind people who are more familiar with PFL politely asking me about my reasons for using IFL – if people are curious and keen to learn about something, that’s fine, and I’m happy to educate.

What misconceptions or stereotypes have you encountered regarding autistic
parents/ing?

I suppose one of the biggest misconceptions is that we don’t even exist! There’s very little in the academic literature about autistic parents – a friend of mine (also autistic; also a parent of autistic children) is studying autism at a Masters degree level and is focusing on parenting for her dissertation – much of the research out there focuses purely on the parenting of autistic children, and not on autistic people themselves being parents, and she’s found that very, very frustrating. Recently, hashtags such as #autisticparent (which this same friend actually originated!) have arisen on social media for people like us to identify ourselves, to ourselves and to others, because we’re so often invisible or erased from the discourse altogether.

Because of broader stereotypes about autistic people concerning things like lack of emotion, lack of empathy, and even – in some cases – lack of intellectual competence, I think there’s also a huge misconception or a stereotype that autistic people wouldn’t ever be fit to become parents, that we couldn’t be trusted to have children. You only have to look at examples such as the recent book To Siri, With Love (a publication I flat-out refuse to link to) to see parents believing that it would be better to deny an autistic person’s autonomy and even forcibly sterilise them than ever risk them becoming a parent.

Then you have the age-old “refrigerator mom” theory – that autism is caused by cold-hearted, cruel mothers. This ridiculous idea (that was regarded as canon in the literature for a long time) might have some grain of truth (potentially! I’m probably giving it more credence than it deserves) in that those mothers might actually have been autistic themselves (but, of course, undiagnosed), and having to parent without adequate support, and shutting down/melting down from the overwhelm of looking after small children –whose autism probably had a genetic determinant (sometimes we shut down because we feel too much –it looks like lack of emotion, but that’s just the exterior). This is just my hunch, of course!

Autistic parents exist, and have existed as long as autism has existed…which means as long as humanity itself has existed! Some autistic people make rubbish parents – just like some neurotypical people. Some autistic people make fantastic parents – just like some neurotypical people. We’re all humans, after all.

What have the people closest to you done to support your development that you found especially helpful?

Helped me indulge things I’m interested in and passionate about – nurturing and cultivating an autistic person’s interests and passions can do wonder for our happiness and self-esteem.

Given me space, and recognised when I needed time alone.

Worked with me and helped me talk through my thoughts, feelings, priorities and plans. Just articulating and communicating these things to someone else helps me to organise them in my own mind. But alongside that, the people working with or living with me have often had to be very, very patient.

Convinced me that I’m capable, that I’m worthwhile, and – more than those things – that I’m pretty awesome. There’s nothing wrong with being told you’re awesome, and being encouraged to accept this and believe it.

What therapeutic approaches (if any) have you used with your child on the spectrum and found to be helpful in supporting positive autistic development? Are there any approaches that you would describe as damaging or unhelpful?

We haven’t tried many formal therapeutic approaches, but the NHS children’s centre where my daughter was assessed and diagnosed did provide us with some really useful therapy in two areas: life/independence skills, and hydrotherapy. These were both done by the same brilliant occupational therapist – she worked at my daughter’s pace, and really helped her to take ownership of developing her own skills, and having a say in goal-setting.  The hydrotherapy was to address issues with anxiety being around water, and also because we are keen for her to learn to swim, but we felt that she needed some additional support to be comfortable in the water before we took her to general swimming sessions. This programme was brilliant – my daughter loved it, overcame her fear of things like having a shower, and now loves the pool. She even had a swimming party for her sixth birthday.

Everything else we do with our daughter is much less formal. It’s about recognising and encouraging her in areas where she’s already strong, and celebrating these strengths. Supporting her with things she finds difficult is framed in terms of helping her understand that improving some of these things might also make it easier to do some of the things she loves doing.

We try to communicate clearly with her and prepare her (or help her to prepare, herself) for things that are coming up in future. As she’s hyperlexic, writing things down helps. It can be difficult to strike the balance sometimes between preparing her enough, and making her overly anxious about something she knows is happening in the future, and we’re still learning how to do this effectively.

We also play along with her a lot. Do things with her, play in the way she wants to play – respect that this, for her, is a good way to play and learn. In this, it helps that I’m autistic. I’m more stimmy, flappy and less concerned with standing on ceremony than a neurotypical parent might be. I really enjoying getting to be a kid sometimes.

The thing I wouldn’t touch with a bargepole is ABA (Applied Behavioural Analysis). It’s like dog-training, but more cruel, and it’s all about making an autistic child seem “less autistic”. It goes against the very grain of how that person learns best and feels most comfortable in their environment.

My autistic daughter is still young. We haven’t explicitly done that much as yet. We just carefully explain that she and I have brains that are a little different from some of the other people she knows and that this means we find some things more difficult than they do, but that we’re better at other things.

At the moment, what I mostly model is giving explanations to my children as to why I react in certain ways to certain things, or behave in a particular manner. I’m hoping that my daughter will gradually learn this tactic – of being able to gently explain what she needs. But I hope this will come from having a good understanding of herself.

I also am clear about things like consent – I ask my children if I can give them a hug or a kiss, and if they say “no,” I’ll acknowledge that this is fine, and that I respect their choice. I think being explicit about things like consent are particularly important in encouraging children – especially those on the spectrum – to advocate for themselves and their own needs and wellbeing.

One of the things I’m increasingly doing is providing typed-up-in-advance, written explanations for situations when I don’t feel able to explain something verbally (I’m fully verbal, but this wavers when I’m stressed or anxious). This is something I’d like to explore more with my daughter.

Oooh, that would be a very long list! But I’d say that many allies’ mistakes arise from naivety, misinformation, wrongful assumptions, or misguided (but often strongly-held) beliefs.

I could go on, but those are the things that most frustrate me. Many neurotypical autism advocates are wonderful, of course, but many do get it wrong. Just listen to us, and pay attention!