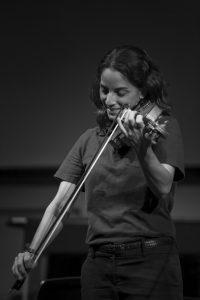 Laura Nadine is an Autistic Self-Advocate, parent of a child with Autism, and teacher of people with Autism.  She works as a public speaker, author, educator and consultant and runs a music school called Enlightened Audio, LLC. This week she shared some of her experiences teaching music to autistic students, tips for promoting self-confidence in both children and adults, and the importance of presuming competence in Facilitated Communication and all areas of life.

Describe the most rewarding work you do. Teaching music? Autism advocacy? Motherhood? An intersection of all these?

The most rewarding work I do is bringing a smile to a child’s face.  When I am working with a kid – whether it be through teaching Autistic self-advocacy, teaching music, or as a parent – I love that smile they get when they achieve something new.  An internal light turns on inside them like a sunrise just after the light breaks the horizon, but it has the energy of a sparkler.  Every kid gets that because they don’t hide their emotions as effectively as adults.  This is a very good thing.

Your recent video explains your support of Facilitating Communication. What would you say to those (both and on and off the spectrum) who are wary of this method?

I’ve actually posted an open letter on my website with my thoughts on this. RPM and other systems like it are the conduits that bring the inner intellect to the ears of a mostly verbal world. Similar to sign language for the deaf, the system requires knowledge of how it works and an interpreter for those on the outside. If I were, as a dancer, to learn a dance number and suddenly invite another person to dance with me, the steps would be clumsy and the chemistry off. As people with Autism, our communication partners, our educators, and our therapists  must be able to dance with us.  We must be able to trust them and see that they presume our competence, cherish our personalities, and avoid shoving us into the pigeon hole of normality. To remove access to this method simply because you do not know how to dance would be as cruel as cutting out the tongue of anyone who sings because we dislike the music.

As a professional, I would like to note that musical talent occurs at the same rate in my non-speaking Autistic students as with my neurotypical students. Some non-speaking students play with more accuracy than others but they all do so independently, and not because of savant syndrome.  Given the hierarchical structure of the brain in regards to musical thinking, it seems to me that a cognitive delay so profound that these students are not able to independently speak using a method such as RPM, then it would stand to reason that they would also be unable to acquire the bilateral, complex skill of playing music on a violin independently.  I would be quite the magician if I were inadvertently channeling my musical talent through them.

What does a presumption of competence actively look like? What behaviors/ways do people act that show they presume the competence of autistic people?

Presuming competence is like self-esteem; it’s an inner idea one holds that permeates through everything we do. In fact, the amount of self-esteem a person has is often proportional to our capacity to presume competence. It’s that idea that we can believe in the potential of people. Only with presuming competence we must have a longer sight than with seeing our own potential. Self-confidence is like using the stars to navigate the oceans; while presuming competence means we’re navigating those same oceans by our memory of the star map rather than our sight of the stars themselves. Once you arrive at your destination, you’ll know it worked.  Many people struggle with this concept of seeing potential in others and that being enough to keep teaching them. I do not struggle with this. It is the deepest version of love I can give.

What are some ways you make your autistic students feel at east when you work with them?

I often begin lessons by telling my students that I am also Autistic. I tell them that I know they understand me and that sometimes their bodies just won’t cooperate with their intentions. Typically, with music, I will give them warnings about sound and sensations but then remind them that they can overcome their sensitivities to the input. Our minds are our own. It is the only real estate that is solely ours and is untouchable by anyone on the outside unless we allow others into our mental space. When faced with negative input from previous experiences, I remind students that negative people don’t deserve a part in our story. Learn from them and then kick them out of your mental space. Then you can open up that space to positive people. I believe it was Eleanor Roosevelt who said, “No one can make you feel inferior without your permission.”

How are you using your musical abilities to improve autism awareness/acceptance? (If you believe you are, in fact, doing so.)

Honestly, I think I shock people when I play. (I say laughing).  My violin is my mouthpiece and music is my native tongue. When I play, I play with the vulnerability of a child and the honesty of a butterfly. It’s all out there on my wings as I flutter in my erratic, but graceful flight pattern. This is opposite to what people expect to hear from me. I think they expect me to be showy and methodical. In this way I demonstrate that Autism is not limited to the bounds of clinical thinking; that cluster of symptoms we have all been taught to expect from Autistic people. When I am playing my violin, I am a raw orb of expressions, transcending the containment of time. Like that scene in the animated 2001 film Atlantis when Kida transiently bonds with their energy source as one entity. I’m just glowing. When I finish playing and I look over the crowd, I can feel their collective energy is meeting mine. In the most unexpected way, I then become a voice for Autism.

They do too little too late. That’s a bit of a broad brush statement though because stating all Neurotypical people have the same motives and deficiencies is just as unfair as assuming this about all Autistic people. That being said, the biggest issues in Autism Advocacy are the lack of Autistic voices, which is improving, and the limitations of rigid structures and bureaucracies that suffocate progress. By the time all the committees decide on something to do and take action, it is often no longer enough and way after it is needed. For example, despite the first lightweight, folding wheelchair being around since 1933, and curb smashing protests in the 1960’s, it was not until 1990 that the Americans with Disabilities Act was passed into law requiring public space modifications for them. That means at least 2 generations of people in wheelchairs lived without accommodations. Today this sluggish cadence of change is even more absurd when you consider the pace of innovation in the new millennium.

Based on your own self-advocacy experiences as well as working with your son, what advice do you have for parents who are teaching their autistic children to self-advocate?

Help them rid themselves of any possible “victim mentality.’ This mentality, which I like to call internal narcissism, is usually brought on by valid reasons, but is held on to until it starts to obscure our vision of reality. I actually talk about this in my new audio book, Follow the Music,  which will be released on my website in July. Victim thinking is much like a smoke alarm. A threat is detected, the alarm sounds, and the resident reacts to the alarm.  Only smoke alarms don’t always go off when there is a true threat like a house fire. A good stir-fry session in the kitchen or even a long, hot shower can cause the alarm to go off. As the alarm painfully shrieks, our inner Rambo is stirred, and we frantically poke the reset button with a broom. I do believe that most smoke alarms are destroyed by violent brooming.

Now the problem is that your attention is on the alarm rather than on what caused the alarm to sound. When we act upon fear, even if it was initially justified, we search for ways to preserve ourselves from feeling that fear. Some people disable the alarm, which is dangerous because it locks us into fear and prohibits us from seeing real threats as they arise.  As victims we become alarm experts, not problems solvers.

A good way to start eliminating this thinking is to recognize how often we use the top 5 most paralyzing phrases:
Why me?
If only I/ they had…
They didn’t tell/teach me that.
It is just the way I am.
I can’t.

Once consumed by internal narcissism, we look for justifications, not solutions. If we see ourselves using these phrases, replace them with action phrases. Don’t ruminate on what others failed to provide, mean things others said, and what we think we can’t do.  Instead, learn from what others failed to do, and focus on action steps you can do now, even if they are just little steps. When I was 10, a man told me that I would never play at Carnegie Hall. No one is so wise to see my own future. Maybe I haven’t played on the physical stage at Carnegie Hall yet, but during the filming of The Shadow Listener, a documentary about me, I was filled with immense joy listening to my students play the music I wrote when I was their age. That was my proverbial Carnegie Hall. I cannot remain angry at that man for being short sighted no matter how much it hurt me at the time. The real tragedy would have been if I let his words stop me from trying.