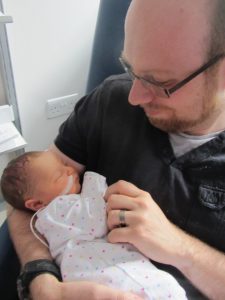 This is Part 2 of our two-part interview with Gillan Drew, a British author and father of two. He was diagnosed with Asperger’s Syndrome at 28 and blogs about his life at Aspie Daddy. Gillan is also the author of An Adult with an Autism Diagnosis: A Guide for the Newly Diagnosed. This week he shared his thoughts on his role as a father and weighed in on some important advocacy considerations for parents of autistic children.

What do you enjoy most about being a father?

There is nothing enjoyable about being a father to two toddlers aged 3 and 1. It’s hell on earth! (joking)

In all honesty, being a parent is difficult, regardless of whether you’re neurotypical or otherwise. There are a handful of highs and a great many lows, and it’s a constant grind that wears you down physically, emotionally and psychologically. That said, I think the most enjoyable aspect of parenting is the feeling of responsibility and self-worth that comes from doing it day to day, morning, noon and night, without dropping the ball and, by all accounts, doing it well. I have two lovely girls who are outgoing, confident, intelligent and imaginative, and knowing that this is in part the result of my efforts in providing them with love, attention and support is very gratifying, particularly as I thought for many years that I’d make an awful father who’d cause his children long-term psychological damage.

True, much of it does not come naturally, and I’ve had to sacrifice much of my own comfort and stability in order to give them the best start in life I possibly can, but I’m up to the challenge and I think that if you want to be a good father, you can be. Since I’m not naturally tactile, I consciously remind myself to hug my girls and smile at them and tell them that I love them, because that’s what a child needs. If I’m anxious or struggling, I hide it so that I don’t pass my difficulties onto my kids, something that’s fairly easy after a lifetime of masking my condition in order to fit in. Socially, my three-year-old is already more capable than me, and watching her make friends is particularly rewarding for someone who never learned that skill.

I spent much of my life drifting, not putting down footprints, and I thought I’d live and die without doing anything of consequence. Having children has made me feel more connected to the world, forced me to engage with so many things I’d otherwise have avoided, and proved to the many, many naysayers that people with autism can be good parents, despite our challenges. It all depends on the individual.

What’s the most important thing parents can do to ensure they raise children with positive autistic identities?

Acceptance is the most important thing a parent can teach. Acceptance of who you are, and validation that it’s okay to be you, are immeasurably important. I spent most of my life fighting against my natural inclinations, trying to be like everyone else, and tearing myself apart because I wasn’t ‘normal’. I was sent to boys camps every summer in an attempt to build my character and force me to learn how to socialise– a.k.a. two weeks of torture each holiday. I put up with years of bullying because I felt that doing what I wanted – going to the library to read a book or hanging out by myself – was somehow wrong. It was always stressed that I had to change, I had to be different, I was defective and needed to be like everyone else or I’d be a failure in life.

The first time I was ever told it was okay to be me was when I wrote about my struggles during my English Literature A-Level. My teacher wrote at the bottom of the assignment: ‘An observer is seldom a participant. Someone has to provide feedback on the human condition. We call these people artists, poets, philosophers. They are what make us us.’

It is that validation – that however you are, it’s okay – that we need to teach to our autistic children. We are not broken, not defective, not worse, not weird – we simply have a different way of interacting with the world, a way that is just as valuable as any other. And whatever you need to do to cope in a neurotypical world is absolutely fine.

One of the biggest mistakes I’ve seen neurotypical autism advocates make is to argue we are uniquely vulnerable individuals who need wrapping in cotton wool. This is especially evident among parents and siblings, who know how hard their loved ones find things and are understandably sensitive to limit the stresses and strains placed upon us. The problem is that by fighting our battles for us, emphasising our difficulties and preventing us from undergoing challenges, they prevent us from growing as people and experiencing the good as well as the bad. While it is true that we have problems, we need to be given the opportunities to find solutions and discover what we can do, in addition to what we can’t. Protection and imprisonment can be two sides of the same coin.

Conversely, I’ve also seen neurotypical autism advocates do the opposite and depict people with autism as far more capable than many of us are. I’ve been to talks encouraging businesses to recruit autistic people where advocates have sung our praises and spoken about us purely in terms of how great we are – we’re not ordinary, we’re extraordinary; we’re not human, we’re superhuman; we’re better than neurotypical workers because we’re more punctual, reliable, honest, conscientious, which is one step short of peddling the myth that we all have savant skills. In short, we’re utterly awesome. Why wouldn’t you want to be autistic?

While I think it’s great to stress the positive aspects of autism, especially since so much that you hear is negative, I think you have to be realistic. Yes, some of us are exceptional; yes, some of us make good workers; but some of us are assholes, and many of us will never work because our social deficits mean we’re not team players. This is not to denigrate us, but I think it does more harm than good to pretend we’re all great when we are, in fact, all individuals.

Another problem is those who claim we’re just like everyone else. They’re the kind who say that everyone is on the spectrum somewhere, and we all have OCDs, difficulties with change, problems socialising, etc., etc., to a greater or lesser extent. While it might be nice to claim we’re ‘just like you’, it can be quite patronising to somebody with autism as it belittles the reality we face and our lived experience. While many behaviours might resemble autistic traits, the root cause and the degree to which they impact our lives is not comparable to neurotypical society. It is like saying to a person with anorexia that you understand what it’s like because sometimes you don’t feel like eating – it’s not the same at all! And if we’re all on the spectrum somewhere, it makes the diagnosis of autism meaningless.

And that brings me to the final major problem of neurotypical autism advocates – overgeneralisation. Many people talk about us as though we’re all the same, with the same problems, needs and solutions, when the reality is that we’re unique individuals and should be treated as such. I knew one well-respected autism advocate who promoted the view that people with autism cannot understand sarcasm and so to use it around a person with autism is a form of abuse – which belies the fact that some of the most sarcastic people I’ve ever met have been on the spectrum. We are not better or worse than neurotypical people – we are simply different. And that’s fine.