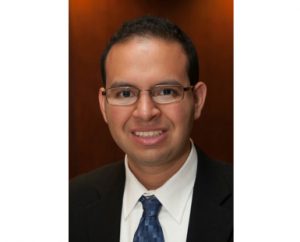 Eric Garcia is a journalist based in Washington D.C. at Roll Call. Prior to Roll Call, he was a reporter at National Journal, writing about politics and the economy. He also wrote a personal essay about life as a reporter with autism for The Atlantic. This week he shared some of his experiences as an autistic reporter.

What do you like most about being a reporter?

This will sound weird to most people coming from someone with autism, but it’s honestly talking with people and building a rapport with them. I genuinely like getting to meet people and getting to know them. Especially on Capitol Hill where there are permanent fixtures, over time you get to know certain people and build a relationship with them. Same with campaigns. Since campaigns have a beginning and end, consultants and advisers go from campaign to campaign, so you build relationships with them and it in turn allows you to talk more frequently and build trust. That in turn leads to a better story in the long run. The second best part is actually writing the story. Worst part: taking and transcribing notes.

As you “climbed the ladder” in your reporting career, did you disclose your autism to potential or current employers? Was this helpful or harmful?

At first I didn’t. Nowadays, if you Google my name, that’s one of the first things that comes up so I have no real choice. Honestly I can’t tell if disclosing made a difference. I never have and never will use it as an excuse or a crutch for anything. Just reasonable accommodations and maybe being a little more candid about discussing autism at times. I mainly just care about doing a good job. I can’t necessarily say whether it might affect future jobs or if it will make people more wary of hiring me because I got my job at Roll Call before that article for National Journal came out. But I do think that it is unfortunate that even if employers can’t overtly discriminate that it might put a bias in some people’s minds. I have enough experience where that might not be a detriment, so I‘m fortunate.

Do you have any guidance for other autistic workers who are wondering whether or not they should be upfront with their potential or current employers about being on the spectrum (either in the journalism field or elsewhere)?

For media, I say disclose upfront. Tell them where you might need accommodations, but then also say that you don’t want to be treated any differently than anyone else. Say you want to be judged on your work. Most employers in media are pretty willing to give reasonable accommodations like letting you wear headphones while working. That being said, that’s not a luxury everyone has in every industry. Some industries might be more biased against it than others so it might be harder and I don’t want to force it on anyone. But in the same respect, if you have the capacity and don’t have too much to lose, I‘d suggest being upfront about being autistic in the work space if there aren’t many others, if anything to make people more comfortable with it. But once again, it’s all about the circumstances and whether you have the security to do so.

You explained in your article for The Atlantic that your interest in politics as well as a “penchant for bluntness” and “utter inability to tolerate spin” has helped you in your reporting career. What is one of your more memorable/successful Washington interviews or stories you’ve conducted or written?

My penchant for bluntness probably came best in handy when I was following around some Democratic members in Iowa a few months ago. There’s a saying that no politician goes to Iowa on accident, because it’s a destination if you want to run for president. Hence when I followed around three Democrats, two from the nearby Midwestern states of Ohio and Illinois and another from liberal Massachusetts, it led me to be more skeptical when they shot down the idea they were considering running for president and do some more reporting to see if they were laying down groundwork for a future run.

So many people disagree about autism therapy, “treatment,” research, and acceptance. In your opinion, where should society focus the most resources and attention in regards to autism?

At this point I think we need more focus on acceptance of autism, which in my mind goes hand in hand with research. The problem is we’ve focused so much research about autism on the causes of autism or biology, which in and of itself isn’t bad. But the concern a lot of autistic people have is that researching the cause of autism might lead to people wanting to prevent autism from existing. That’s understandable, especially as we will have new ethical questions about gene editing in the coming years.
Similarly, John Elder Robison has said it to me and in a few other instances that the research that is being prioritized focuses too much on long-term solutions that will only benefit people 30 years down the road. There isn’t enough research to help autistic people right now who say, struggle with employment or transitioning from high school to adulthood. There isn’t that much research in terms of how aging affects autistic people or how to deal with mental health, though Autistica, a UK research charity, is making mental health its top priority. I wish the states would do more on that. We also don’t have much of an idea of how many autistic adults exist in the U.S., and I think we need more work there. So the short answer though is I think we need to focus on acceptance, which can then lead to better research.

Most mistakes neurotypical advocates make stem from not really listening to autistic people and thinking they know more. This is especially prominent with parents of autistic children who may require more attention. A few months back, there was a big flare up at the Interagency Autism Coordinating Committee between parent/NT advocates and autistic self advocates like Sam Crane and John Elder Robison. Sara Luterman did a great job breaking it down. There is this feeling among some parents that supposed “high functioning” self-advocates don’t understand the needs of “low-functioning” autistic people (though I am not a fan of either “high” or “low” functioning as labels). But oftentimes what they don’t recognize is that by putting their needs at center stage, they ignore the needs of their loved ones. I somewhat understand the impulse, given that it’s easy to see someone who is verbal and say they have it easier than their loved ones who might be nonverbal or might require more attention.But I think they don’t recognize that many so-called “high functioning” advocates are the best advocates for the interest of non-verbal people and those with intellectual disabilities precisely because they are part of our neurodiverse family. Autistic advocates have the biggest stake in ensuring their success.

What is the most important thing people can do to help their children, relatives, or friends develop positive autistic identities?

I think the best thing is to first and foremost listen to their needs. That or ask other autistic people you know. Of course the flipside of this is we autistic people need to be a little more open about being autistic if we can, like I said earlier, and offering ourselves as resources. This will make it easier if someone in your office had a kid who was just diagnosed to maybe go up to you and ask “hey what do I do?” So the most important thing is to listen. The next thing is don’t always trust Google or the internet. I understand the desire to look up anything and everything about autism after your kid was diagnosed. But a lot of times it can lead you down a rabbit hole of quackery. Be discerning. Find advocacy groups run by autistic people. Read books written by autistic people or blogs or Twitter accounts.