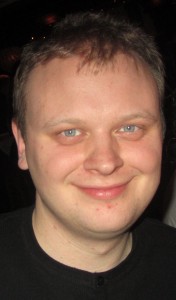 Chris Bonnello is a public speaker and writer with Asperger’s syndrome from Great Britain. He formerly taught primary school in Britain where he worked in special education classes with children on all areas of the spectrum. Chris currently blogs at autisticnotweird.com where he writes to raise awareness about the needs of people on the spectrum and offer guidance to those “trying to navigate their way through life with autism.” He is also working on his MA in Creative Writing.

In your experience as a former primary school teacher working with children on the spectrum, what mistakes have teachers of autistic children made and what are some examples of positive supports that have led to educational success?

I don’t want to generalise, or imply that my answers are common mistakes made by teachers, because most teachers I’ve ever met do their job well because they’re honestly rooting for the students. Although if I had to pick the most common ones, I’d say occasionally talking about the student as if they’re not in the room, and seeing everything in the context of autism rather than in terms of the person. (Incidentally, these are actually the first two points from my post “Five ways to damage autistic children without even knowing”: http://autisticnotweird.com/five-ways-to-damage/ ) Admittedly, these and other mistakes are occasionally due to stress- working with children with special needs is not easy, even without the insane workload and constantly changing hoops that teachers are forced to jump through.

Positive supports? Encouraging the children to communicate, and offering them opportunities to communicate in whatever way they feel comfortable with. As well as social and educational benefits, enabling a child with communications difficulties to express themselves can be the factor that protects them from abuse.

Oh- and getting to know the student as an individual too. Sounds obvious, but I can’t stress it enough.

You’ve recently begun an MFA program and are trying to publish your first novel. What are the specific challenges and successes you’ve experienced in this area of your life?

Wow, I barely know where to begin! In terms of challenges, I’d say the transition between writing for fun and writing with the ambition to publish. Like most creative professions, the talent is free, but the proficiency takes an awful lot of work. Thankfully, it’s even helped my non-fiction writing skills, which, in turn, has helped me when writing Autistic Not Weird.

Successes? I’d say that writing has given me the ability to play to my strengths, and since my spoken language is shaky at best (unless I plan my sentences in advance), it’s a great way to communicate fluently. Also, during my tougher years, it was therapeutic to be able to build and control my own worlds since I felt like I had no influence in the real one.

You have a blog post dedicated to all of the wrong ways to react to someone’s autism diagnosis. What do you think is the most inappropriate response and why?

Do I have to pick just one? Because I’m thinking the most inappropriate response is any that shows no interest in understanding the person. Even the infamous “you don’t look autistic” is sometimes said out of genuine surprise rather than deliberate hurt. There are uninformed responses and ignorant responses, and I won’t condemn anyone who asks inappropriate questions out of a genuine wish to learn (since to me that’s the complete opposite of ignorance).

It’s a lack of willingness to understand that’s the worst response. The worst example of this I can remember was a friend who heard me talking about Asperger’s and oh-so-subtly asked “so who decided you were autistic?” As is often the case, it was the tone behind it rather than the literal words.

Many parents of autistic children who discuss specific deficits or challenges dislike when other parents draw similarities between their typically developing children and autistic children because it minimizes the autistic child’s experience and the work that parents have done to support their child’s development. Can you speak about this from the perspective of an autistic adult? What do you think when you hear parents make these comparisons?

It’s worth bearing in mind that other people are often naturally sympathetic. And they’re often aware of how isolating parenting a child with special needs can be. I think, from their perspective, they’re trying to remind the other parent that they’re not alone. They may express it unwisely, but it’s often intended as kindness. (Except when it’s not, of course. It’s rarely used to discredit a child’s diagnosis, but sometimes is.)

I often hear people say “oh I do that too!” when I describe how my Asperger’s affects me. I think they don’t realise they’re trivialising the things that really affect us. My inability to do more than one thing at once is often described- humorously- as “a man habit.” And my response is usually “…yeah, let’s go with that. Let’s pretend that it’s not literally a development disorder.”

(Although if it’s not malicious, we should be quick to forgive. After all, what should they think they’re supposed to do? Remind us of how isolated and lonely we are?)

What are the most common topics that you are asked to speak about?

Surprisingly, when I ask the question “what do you think the audience needs to hear about,” often the response is “whatever you want, it would be nice to hear hear the perspective of an autism speaker who actually has Asperger’s!”

I tend to tailor my talks depending on the audience obviously- with educational charities, I do a talk called “Top 20 tips for working with students on the autism spectrum,” and with parent groups, it’s often “Ten things I wish I’d learned as a child with Asperger’s.” But in answer to your question, I’m usually given free reign.

What mistakes do parents make when advocating for their autistic children?

Again, I’m extremely wary of generalising. And I absolutely don’t want to be interpreted as besmirching the efforts of parents who fight tooth and nail for their children with very real and honest resolve. (Essentially, in order to answer this question I’m reaching for mistakes that only a minority of parents make).

But if I absolutely had to pick two, one of them would be phrasing things in a way that makes it sound like they’re raising awareness of themselves rather than the children (I don’t think any parent intends to do this, but if your advocacy sounds like “how difficult it is to raise an autistic child” rather than “how my autistic child is struggling,” others may interpret your advocacy wrongly).

The other would be raising awareness of their child at the expense of others on the spectrum. I’ll always remember how, when Julia was unveiled as an autistic Sesame Street character, some parents actually objected to her(!) on the basis that her autism was “not severe enough” and wasn’t an “accurate” depiction of autism. What they actually meant was it wasn’t a depiction of their own child’s autism, therefore it did not serve their advocacy purposes. Sure, it helps a load of other autistic children, but they’re irrelevant.

What advice do you have for parents of school-aged autistic children?

1) Don’t spend their childhood worrying. Sure, parents are supposed to worry- it’s a vital part of parenting! But try not to approach everything with automatic pessimism.

2) Allow the children to find their strengths and play to them. Let them know what they are good at, not just what they struggle with.

3) Help your child to remember that they’re not alone, despite how isolating autism sometimes feels.

4) Never, ever let them forget how much they’re loved.

To be fair, I’d give most of the above advice to parents of non-autistic children too. Autistic children often have a lot more in common with the general population than we give them credit for, despite the struggles they often face.