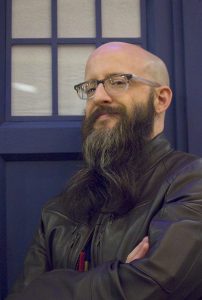 Jim C. Hines is the author of twelve fantasy novels, including the Magic ex Libris series, the Princess series of fairy tale retellings, the humorous Goblin Quest trilogy, and the Fable Legends tie-in Blood of Heroes. He’s an active blogger, and won the 2012 Hugo Award for Best Fan Writer. This week he shared his experience as a parent of an 11-year-old on the autism spectrum.Jim reveals some of the ways he has learned to help his son develop his own unique identity.

How did you discover your son’s diagnosis?

We had enrolled him in an early childhood/preschool program, and about halfway through the year, the teachers told us they’d noticed he was having some challenges. His physical coordination was lagging a bit behind, and he was noticeably more rigid about how he approached some things. His first “official” diagnosis was through the school a year or two later, as part of setting up an IEP (individualized education program) so they could do a better job of working with him. We got a diagnosis through a psychiatrist a little while after that, so that our insurance would cover some physical and occupational therapy.

What are some ways you’ve had to advocate for your son (either in school or in the community)?

We’re very fortunate in that our schools have been incredibly supportive so far. We’ve tried to make sure we meet and communicate with his teachers and the staff at the school. I work from home, so I’m usually available if there’s an issue where he’s having a rough day or if he just needs to take a break and call and talk to someone he loves and trusts for a few minutes. I’ll be helping to chaperone a field trip later this year because he and I both think he’ll do better with a parent there. I don’t really think of most of this as advocating. It’s more just trying to support him.

What are some common misconceptions about autism you have encountered?

That there’s a lack of empathy or emotion. That people with autism are incapable of learning social skills or boundaries. And then there’s the big myth about autism being caused by vaccines. No matter how often that gets debunked, people still bring it up. Like my son once said when he saw me talking about this online, “Even if vaccines did cause autism, I’d rather have autism than get all those diseases. Because having autism is fine.”

Do you feel like you’ve made any mistakes learning to help your son develop his potential?

Find me a parent who hasn’t made mistakes. Some of my ongoing struggles are trying to walk the line between supporting him when it’s helpful while also giving him independence and freedom. Even when that means freedom to make mistakes.

In what ways has your son learned to self-advocate?

He’s learning to recognize when he needs to take a break, and to ask for them. He’s gotten better about talking to teachers and other grown-ups for help when he has a problem. We’re still working on both of those habits, but he’s come a long way.

What are some of the most valuable lessons you’ve learned while raising your son?

One of the biggest things is to just let him be him. He’s a bright, loving, compassionate, goofy, wonderful kid. It’s not about turning him into someone else. It’s about helping him be as successful as possible as himself.

Interested in hearing more from Jim Hines or reading some of his work? Visit his website: http://www.jimchines.com/