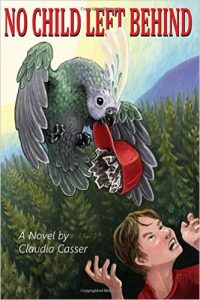 We, the literal-minded neurodiverse, don’t perceive the world the way you do. We interpret your words literally, and we trust you absolutely.

You know this, but you still teach us about the world as if we were neurotypical children; except you shield us from unpleasant realities even more vigorously than you shield them. You do not think through what this means when we step outside the house.

Your shielding sets us up for a fall every day. Every day outside your cocoon, we relive the same emotions that neurotypical children feel when they realize Santa is not real. Even in our fifties.

Because we literal-minded neurodiverse are also over-sensitive, these emotions taint our lives. Because we trusted you absolutely (we don’t understand that there are degrees of trust), we feel betrayed. Because we don’t understand that something exists between truth and lies, we feel like you made a fool of us. And we suffer the same bad feelings even when we know, intellectually, that there was no bad motive behind your deceptions.

By the time I was in fourth grade, I had already learned that my mother could make mistakes of fact. I corrected her mistakes daily. My physician father, however, who probably was on the spectrum himself, never told me anything he wasn’t sure was accurate.

One day, I told my much admired fourth grade teacher that I was “ambivalent” regarding the desirability of participating in a project. Unfortunately, I pronounced it am bi VAL ent, as did my chemistry-oriented father. My teacher corrected me. I corrected her, telling her my father said it was pronounced with the emphasis on the third syllable because the Latin morphemes were (i) ambi and (ii) valence, and my father never lied to me. My teacher demurred. I was outraged she dared imply my father had lied. This argument escalated into a fit that lasted until my mother picked me up early from school.

When my father got home from the office, he consulted a dictionary, recanted, and apologized to me.

Of course this is funny now, but back then it was devastating. It shook my world.

By the time I entered the “grown up” world of middle school, however, my inappropriate feelings of outrage and betrayal became an almost daily trial. Why?

Because parents and teachers and religious figures and books taught me moral and legal rules nobody followed. Well, rules people followed some of the time but not all the time, which, to me, was even worse.

For example, out of naiveté, laziness, or the desires to over-protect, control, or exploit, those in power over children teach:

We are a nation of law, not men.

Rules and promises must be kept.

Good people follow the rules and keep their promises.

People who violate rules or promises will be punished.

Religions endorse these myths, except some admit that sometimes rule-breakers aren’t punished until an afterlife. Children’s books nearly universally reinforce the myths.

The literal-minded neurodiverse do NOT instinctively add these qualifiers.

(We cannot conceive that neurotypical “good people” don’t even feel remorse or cognitive dissonance from most of their rule-breaking. Even when the literal-minded neurodiverse realize that exceeding rather than conforming to the speed limit is the “norm” (in both senses of the word), we still feel cognitive dissonance when speeding. At the ripe old age of 63, I still hear “bad girl” in the back of my mind as I race down the highway.)

So what can parents do differently to prepare their literal-minded neurodiverse children for the real world? Prepare us to protect us.

Clearly explain to us the way the world actually works, as well as how people pretend it works. While you are explaining to us that insecure people and jealous people and unhappy people may take out their pain on us, also explain that the only rules without numerous exceptions are mathematical rules (because they are merely consensual definitions and their logical corollaries). Tell us that even important rules like “thou shall not kill” can be swallowed in their exceptions.

Forewarned is forearmed, or at least allows us to begin constructing coping and defense mechanisms. My favorite was to envision each poisoned dart from a neurotypical peer as a grain of sand in an oyster, and, like the oyster, to cushion the poison irritant in layers of pearl, making something beautiful out of it.

In particular, I suggest you do the following, starting from the earliest possible age of your child:

(For example, in my home, my parents were fanatic about fairness between me and my older sister, down to ensuring that, in grade school, we each got half a Hershey bar (5 little squares) for our Saturday night treat. However, my sister thought it was substantively unfair that she, four years older and hungrier than me, got only the same number of squares as me. Her argument persuaded me, so each Saturday, without telling our parents, I gave her one of my squares. Do you think the original fifty-fifty division of the Hershey bar was fair, or the revised sixty-forty division?)

In short, I recommend proactively educating your literal-minded neurodiverse child about the unpunished rule-breaking and unfairness they will encounter outside your home. In the long run, it creates much less stress for us than your efforts to protect us from unpleasant truths. Each new “violation” of the rules and personal “betrayal” we perceive outside your protection may still pain us. But forewarned, these “outrages” won’t confound us.