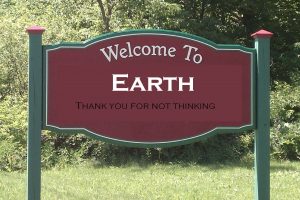 How does the autistic mind perceive the neurotypical world? This autistic-authored “guide” offers insight into a perspective neurotypical parents may have never heard. The article below is an excerpt from Frank L. Ludwig‘s The Autist’s Guide to Planet Earth. It was originally posted on his website and is reprinted here with his permission.

‘People are strange when you’re a stranger’ – Jim Morrison

The main objective of the average Earthling is not individual happiness but acceptance and success within their social units.

Every Earthling is a member of several social units which are direct, concrete or abstract. The direct unit is immediate family while the concrete units are those whose members know each other personally, such as workplace, school, church congregation, regular pub etc, many of which tend to be interlinked. Another unit, the circle of friends and acquaintances, is usually drawn from these social units.

Abstract social units are those whose members don’t know each other personally, such as nationality, race and religion.

In general Earthlings don’t identify themselves by personality, interests and opinions but by the social unit which is most important to them or most relevant in the situation, such as nationality, religion, political orientation etc.

Within their social units Earthlings strive to be as successful as possible and are in permanent competition with each other. (The element of competition amongst Earthlings can’t possibly be overestimated.) Success in this context means of course accomplishments that manage to impress others within their social unit; an epic poem on the Trojan War is, for example, unlikely to excite the members of a football fan club while an autograph from one of the players will.

A lot of Earthlings have a bizarre conception of the term pride. While many are understandably proud of their achievements others claim to be proud of belonging to certain social units (nationality, race, religion etc), as if it were an achievement to be a member of (and, in most cases, having been born into) that unit.

Even everyday conversations of Earthlings, as innocent as they appear on the surface, usually focus on more or less subtle competitive elements and display the speaker’s tendency to show off, challenge or belittle.

Competition also plays a large part in their relationship with friends, such as comparing scores of any kind, playing competitive games and even identifying with the victories of others within their abstract social units, such as the local or national football team.

Besides competition hierarchy is another important component of being an Earthling. Everybody needs a place within a hierarchal structure, with leaders and followers; those at the top of these structures usually believe in invisible beings who watch over them while those at the bottom keep dogs or children they can boss around.

There are many Earthlings who change their social units, especially after their childhood when they find they disagree with their parents’ or guardians’ opinions on certain issues. But they will always join other units and, usually unquestioningly, absorb this unit’s world view.

Nuances of individuality are tolerated to a greater or lesser extent, but very few Earthlings venture outside the socially accepted spectrum of self-expression.

If the vast majority of a social unit consider a custom or habit to be necessary or acceptable most Earthlings will automatically do the same, regardless of how immoral or inhuman that custom may be; from the physical, psychological and indoctrinational abuse of children to slavery and genocide. And of the handful who realise that these practices are morally wrong very few have the courage to speak up; after all, they’d be putting their social status at stake.

Standing out is only acceptable in the past. This may sound strange, but while society venerates those ‘heroes’ of the past who brought about the social changes that are in place at the moment all those ‘heroes’ were and are ousted by their contemporaries for opposing the present social structure.

While visiting their planet it should be kept in mind at all times that loyalty to the social unit is the most cherished value and far more important than justice or honesty.

Earthling children do not learn by experimenting, enquiring and logical thinking but by copying adults and following instructions. While in this way they develop their motor skills considerably faster than we do most of them never develop any questioning skills. Whatever a person in authority orders them to do or not to do or to believe or not to believe is accepted without any request for an explanation.
The lack of questioning skills is a major shortcoming of Earthlings and would lead to the status quo remaining indefinitely were it not for us.

Most of their academic education consists of practice and repetition and leaves little space for creativity and critical thinking. In general, creativity is confined to specific arts classes while critical thinking is not encouraged at all.
The most convincing arguments used in an Earthling’s education are ‘It was always done this way’, ‘That’s how everybody else does it’ and ‘Because I say so’. In scientific matters they are being referred to authorities in the particular field whose methods and conclusions are not allowed to be questioned.

However, the main objective of the Earthlings’ education system is not what they learn but whom they meet. Making connections is the most important part of their schooling because knowing the right people is vital to further their status and career in later life. As they say themselves, ‘It’s not important what you know, it’s important whom you know.’

To read the remaining sections, and for the full text of this article, click here.