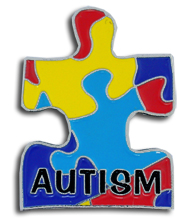 For years, Autistic people have been condemning the use of the colorful jigsaw puzzle piece that stands as an international symbol for autism awareness. But their voices haven’t been able to overpower the media push to use the symbol. It’s everywhere: on clothing, keychains, coffee mugs, license plates, organization logos and promotional materials. Many families use the logo to advertise “autism awareness,” their personal connection to autism, or their commitment to finding a cure. The symbol was designed to represent the complexity of autism and how little is known about it. On the surface, it seems like a memorable and harmless advocacy symbol. But I don’t buy anything with a puzzle piece on it because of how many Autistics have condemned the use of this symbol. Certainly not ALL Autistics condemn the puzzle piece (and each Autistic person has the right to define and interpret and identity with it as they wish); however, it’s important for neurotypicals to note that it’s not that some Autistic people don’t like it–it’s that they are deeply offended by it, and many NTs are unaware. As NTs, it is less important with how we interpret the puzzle piece, and critically important how the Autistic people in our lives perceive it.

The word “puzzle” often implies that clear answers are not available, that something is not easily understood. Many Autistic people don’t feel comfortable branding their identities with the label of something that the world does not understand. Obviously more needs to be discovered about the Autistic condition and ways to make the symptoms less disabling. The puzzle piece reminds people about how little is known and encourages them to participate in and contribute to autism events so that hopefully, with more support, more can be revealed about this confusion condition. However, this symbol also reminds Autistic people that they, as people, are confusing, which further alienates them from the rest of society.

This symbol also suggests that, like a puzzle, autism can be viewed as a problem that needs to be solved. This perpetuates the idea that there is something wrong with Autistic identity. Many Autistics like to make distinctions between speaking negatively about autism itself and speaking negatively about specific symptoms (or co-morbid conditions). It’s frustrating and discouraging to live your life as if the world thinks there is something wrong with you (not just one particular thing you are doing, but because of who you are).

Some Autistics dislike the symbol of a colorful puzzle piece because it appears childish. The bright primary colors and image of a “toy” most commonly associate with children identify autism as a childhood disorder and that attention should be paid to how it affects children. But those children grow up and they still are Autistic (with the exceptions of the few who claim to have been “cured”), and not enough media attention is paid to the specific supports that are needed post-childhood.

The jigsaw piece also signifies that something is missing. That Autistic people are not whole. That they are less than human. But Autistic people don’t believe they have something missing. Again, going through life as if the world thinks you are inferior is wearisome and discouraging.

Opening yourself up to the Autistic community and what they have to say (instead of crusading to make your child appear more normal) can be eye-opening. What you think may be an important way to support your family and spread awareness about autism may actually be offensive to some. If we are serious about supporting the autistic community, we must begin by listening to them and believing that what they are saying is worth something.