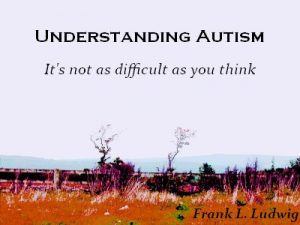 The following article was originally published on http://franklludwig.com/ by Frank L. Ludwig. It offers a careful analysis and explanation of a variety of autistic behaviors in an effort to help neurotypicals better understand, support, and accept people on the spectrum. It’s a great read for parents, families, and educators of autistic children and adults. It is reprinted here with the author’s permission.

‘Everybody is a genius. But if you judge a fish by its ability to climb a tree, it will live its whole life believing that it is stupid.’
– Albert Einstein

Being autistic means being different – not only different from those outside the autistic spectrum but also from those inside. It might be said that autism is ultimate individuality.

This, of course, leads to problems in a society where everybody is expected to conform. When as children we are pressed to do things we don’t want to do and to perform routines and rituals without seeing the reason behind them, we start to revolt against a world that doesn’t make sense to us and which tries to force us into submission.

When this proves unsuccessful, we withdraw from the world as much as possible in order to protect our feelings and our identity. And if you want to get through to us, the most important thing is understanding our position – empathy, respect, reassurance and patience will get you a lot further than you imagine.

While non-autistic children learn by copying adults and following instructions, we learn by experimenting, enquiring and logical thinking. Therefore it’s not sufficient to tell us what to do and what not to do, you will have to convince us of the reasons behind it; this is also why we are far more likely to question anything without (or with flawed) proof or things that are handed down as facts.

Another significant difference in the way we learn is that either we understand something that is taught or we don’t. If we don’t, teaching it over and over in the same manner will not make the subject more accessible to us; you will have to look for alternative methods to do so. And if we understand it, there is no need for permanent repetition of the subject matter; on the contrary, repetition will dull our senses and reduce our attentiveness by neglecting our constant need for intellectual stimulation. This is also the cause for our reluctance to do homework.

It is also important to give us the feeling that we have a say in our lives. Giving us plenty of choices will make life a lot easier, both for you and for ourselves.

Because we are never sure what to expect from those around us and society in general, and because our attempts to communicate are routinely overlooked, misunderstood or ridiculed, we live in a permanent state of anxiety and frustration.

More than other individuals, autistic people need privacy and time on their own. Because all kinds of socialising, even (and in many cases especially) with family members, are demanding and exhausting for us, we need to spend a lot of time away from it all to avoid sensory overload. Therefore autistic children who have no opportunity to retreat to a safe place where they can be on their own tend to develop more mental problems and difficult behaviours and often end up on the ‘lower-functioning’ end of the spectrum.

Despite our headstrongness, we are easily pushed into uncomfortable and even embarrassing situations within personal and professional relationships. This is a result of either our fear of jeopardising this relationship in case we don’t oblige, or of our ignorance as to how much can be reasonably expected from somebody within such a relationship. For example, the exploitation of contacts in order to gain an advantage for ourselves or somebody else, i.e. the ‘old boy network’, goes against every fibre of our beings, and being talked into doing so by a partner, relative, friend or boss leaves us in a state of mental purgatory.

We tend to have a very strong and inflexible sense of morality and justice which others often consider stubborn. As in all areas, we develop our sense of right and wrong by rational thinking, such as ‘I don’t want to be hurt, therefore it is wrong for anybody to hurt anybody else’ (you could call it logical empathy). This makes our opinions more rigid and allows for less exceptions; it also makes us more likely to disobey orders that go against our conscience and speak up against any form of injustice that is accepted by society, regardless of the consequences.

Most of us are firmly grounded in the present because the past can’t be changed and the future can’t be known.

Sometimes we find it difficult to seek help or assistance for fear of annoying others or being considered ignorant.

It is quite common for us to develop unique approaches to anything from doing chores to solving problems. You may feel the need to correct us because our techniques seem too awkward, unconventional or unnecessarily complicated, but keep in mind that what appears complicated to you may be simple for us, and vice versa. Just tell yourself, ‘If it works, don’t fix it.’

Many of us have problems articulating ourselves, and some of us never talk at all. This doesn’t mean that we don’t want to communicate; many of us have learned to express ourselves through writing or typing on computers or stencil letter boards or by learning sign language and thus were able to finally get in contact with our caregivers and the world. It also gave us the opportunity to prove that we are not as stupid as many like to believe – on the contrary, most of us turn out to be highly intelligent.

A lot of us find it difficult to talk about the weather (unless meteorology happens to be our area of expertise, in which case you may be sorry you brought it up) because we don’t see the point, and communication for the sake of communication is an alien concept to us. We also find it difficult if not impossible to say niceties that we don’t mean; if we did, not only would our compliments be entirely worthless, but we would put our credibility at stake.

Most of us have one or more areas of expertise from a very young age which we may rant on about, either because we assume that you’re interested or because we can’t think of a more appropriate conversation topic.

We say what we mean with no intention of offending anyone, but our honesty and bluntness are often misinterpreted.

We tend to have a very strong sense of fairness which generally isn’t affected by our association with either side.

We have a hard time noticing and deciphering non-verbal communication, such as body language, facial expressions and undertones. So if you have somethingto say, say it – literally.

Many of us have problems making eye contact because it feels intimidating and prevents us from focussing on the conversation.

Most of us have some sort of a stim (which is short for self-stimulation) such as rocking, hand flapping or face picking. There can be plenty of different reasons for this since it helps with self-reassurance, focussing and dealing with anxiety, to name but a few.

We can only do one thing at a time, but we are a lot more focussed on and absorbed in matters that are of interest to us than others are. We have great potential, provided we are given the opportunity to develop it.

Perfectionism is another common trait in autism. Many of us have to do everything 100% and get highly embarrassed when we (or others) discover the tiniest flaw in our work. I’ve come to think that the fear of not being able to master something perfectly from the beginning may be a common reason for not even attempting it (such as speech).

Many of us have sleeping problems because we find it difficult to stop thinking and ‘switch our brains off’.

We are easily discouraged. One ‘He won’t ever learn to spell’ can be the death knell of a brilliant literary career.
Researcher Bill Jenson observed that ‘if you drop your expectation level for a child with autism, they will drop to that level.’
THIS FACT CAN’T POSSIBLY BE OVERESTIMATED!

We also have a tendency to seek reassurance from others in our fields of expertise. The problem can arise that in many cases we know more about the subject, even as children, than the adults around us, and therefore don’t get a qualified answer or appropriate reaction. If we seek reassurance and you don’t have the knowledge to supply it, please be honest and tell us exactly that.

For us, all sensations are perceived unfiltered, which means the buzzing sound of the fridge and the sizzling of the frying pan are just as intense for us as your voice when you’re talking to us. Sometimes the intensity of these sensations can become too much for us to deal with and lead to a meltdown which may look like, but should not be confused with, a tantrum. Others may react to such overwhelmment with headaches or migraines, epileptic fits or absence seizures or a state of hyperactivity. In many cases these reactions either become avoidable when we reach the stage of being in control of our own lives or are replaced with an obsessive but tolerated coping mechanism in adulthood.
The sensations triggering us off can be of any kind, such as visual, auditory, tactile, olfactory, gustatory or emotional.

Autistic individuals often display attitudes and behaviours that are considered extreme, and in many cases these are caused by insecurity. For instance, our environment is governed by rules that in many cases can be bent. Since we are not aware of the acceptable extent of diversion from them, we tend to either become sticklers for these rules and won’t tolerate any exceptions, or we rebel against rules that don’t make sense to us altogether. And while some of us cave in under pressure to give up our identities, others fight tooth and nail to hold on to theirs.
Other examples would be autistics who, because they don’t know how to regulate eye contact, either avoid it entirely or stare at the other person, or those who, unaware of the rules of conversation, either remain quiet or keep waffling to an uninterested audience.

Many non-autistic but often well-meaning professionals consider themselves experts on autism. Since autism is ultimate individuality, and every individual’s autism manifests itself in different ways, there are no experts on autism; the only ones with a basic understanding are other autistic people. Therefore, never take an ‘expert’s’ word on what we can and, more importantly, what we can not do. Never believe there is anything we can’t achieve!

Some of us, like myself, embrace their condition and see it as a natural and indispensible part of human diversity while others would prefer to get rid of it, like the man who posted on Facebook that he’d ‘gladly sacrifice 30 IQ points to be like everybody else.’ But in either case, understanding and respecting our individuality and uniqueness will make it a lot easier for us to function in a world that doesn’t make a lot of sense to us.

This article was peer-reviewed by other autistic individuals in several Facebook groups and edited accordingly to make sure that everybody on the spectrum can identify with it. If you are autistic and have something to contribute, please send an email to