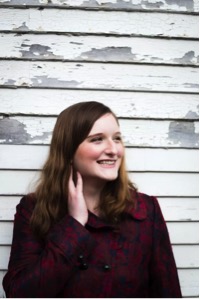 Alix Generous is a professional speaker, neuroscientist, author, tech consultant, and observational comedian. From 2013 to September 2016, she was the co-founder for Podium (formerly AutismSees), a social impact company that creates technology to help high functioning autistic millennials improve their presentation skills. In her 2015 TED talk, she comedically shares how tech improved her public speaking skills. This week she shared some of her personal experiences growing up on the autism spectrum and the current state of autism-related technology.

You mentioned in your TED Talk about how Aspergers created difficulties with the “social skills one is expected to display.” Is there a difference between social skills necessary to develop true potential and mere social skills that society “expects?” Or is this distinction unnecessary?

You’ve said you were misdiagnosed 11 times? How are you able to identify a “misdiagnosis?” How can parents (and their children) be aware of this possibility?

I think it’s important to get a second opinion and educate yourself. For example, when you’re shopping for therapists, psychiatrists, or an ABA provider of any kind, interview them as if you are interviewing babysitters that would take care of your children by themselves. Have that high standard. But also be open-minded if you’re not medically educated.

Autism develops before birth. And signs develop early on, so early diagnosis is key. The most important thing is to not succumb to denial and pretend like things are okay when they’re not.

I highly suggest evidence-based treatments that have shown to help people with autism. For me, the mental health culture was slightly different. I was diagnosed in the mid-90s. At 4-years-old I got my first diagnosis of ADD and bipolar. My parents knew something was up, but they didn’t quite know what to do about it. In this situation, education is key. Even a simple Google search will help you become proactive and familiar with different types of disabilities and always be a step ahead of what you think it might be. Be wary of sources that are not of medical or scientific origin as it can be dangerous.

Discuss how the future of autism technology might lead to more people on the spectrum being able to communicate the wonderful inner workings of their minds.

Nothing can replace in-person interaction. But biofeedback technology is important. Robotics offers promising insight into things. Obviously, we still have a long way to go. There is a certain problem that one encounters when they’re researching tech is that when children grow up being on the iPad, they become disengaged from the community around them. So it’s important to not use technology to isolate them. But the more positive social interactions they can get, the better. One cool thing is tech for parents helping kids with autism. For example, there are apps to help BCBAs keep track of behavior for ABA therapy.

You’ll find that you really have to research the technology because there are both great and not so great developments. So I suggest researching and asking medical professionals about their experience with it because everything is turning digital now, and having tech to engage your community and improve themselves is most important.

Have you received ABA? What is your opinion of this therapy?

I have never received it, but I am being trained in Applied Behavior Analysis to help kids with autism now. I like how it’s results-generated. I like how it’s data-driven. Also, when the technicians are interacting with children, it’s like they’re playing with them. You have the seriousness of evidence-based models combined with the engagement of talking with someone. I think that’s awesome.

What mistakes have you seen autism advocates make?

They are enabling their child’s behavior and not distinguishing between bad and good behavior vs. autistic behavior. Setting boundaries with people on the spectrum is extremely important. This means setting boundaries for what is acceptable and age-appropriate behavior and what is not and identifying whether you’re projecting your own issues or if an issue is actually occurring.

My biggest piece of advice, although I know many people won’t take it, is to research cognitive distortions on Google and learn how that applies to them. One type of cognitive distortion is projection, where you see your problems in somebody else and assume that’s what they’re going through too. Catastrophizing is where you blow things out of proportion. Black and white thinking is another cognitive distortion. It’s important that both the child and the parent are aware of it.

I think a lot of parents go into treatment with their children to find them the right resources thinking it’s all the child’s problem, like autism is such a hard thing to deal with, when, in actuality, the parents are contributing to the hard behavior, and they might not know that they are actually enabling it. I think in that case it’s important to have an objective third-party who is observant enough to notice these things. For many parents, this could be an occupational therapist, BCBAs, any therapist of any kind. It’s also important to be open to improving yourself in your own mindfulness. It’s always a tragedy to see that the child has to do all the work to change and then the parents feel like they don’t have to, when, in actuality, the child’s success depends on their ability to be a good parent. And being a good parent means you have to step outside of your comfort zone to improve yourself so you can improve the environment around you.

How can parents help their children develop a positive autistic identity?

Early diagnosis is key. Another thing is to be positive about the situation. A lot of people think individuals on the spectrum lack empathy, when, in actuality, they are very sensitive to energy around them (the feelings of others). A lot of times sensory tantrums feed into it. Parents shouldn’t put down a child or say, “Oh sorry, she has autism, excuse her.” When a child is upset, don’t ever say, “Oh, did you take your meds?” because that devalues what they are trying to tell you. It’s very important for parents to educate themselves on what ableism is. They can identify it not only in themselves, but, more importantly, in others, especially neurotypical siblings, and help get the whole family in to support the wellbeing of children.