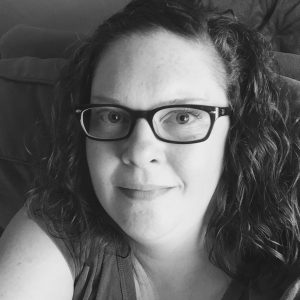 Megan Amodeo is a writer, autistic self-advocate, and stay-at-home mother to three, 2 of whom are on the spectrum. Prior to staying at home with her children, she worked in special education. She currently writes for geekclubbooks as an “Autism Insider.” This week she shared her experience receiving a late diagnosis and the joys of being an autistic mom.

What challenges (if any) did you experience growing up autistic? Would any of these have been alleviated with an earlier diagnosis? Do your children face the same challenges?

Growing up without an autism diagnosis definitely presented me with some challenges in life. I knew from a very young age that I was different from my peers. Knowing I was different but not knowing why caused me a lot of stress and anxiety. I was always trying to be like those around me. I had trouble making friends and interacting socially with others. Due to the fact I was different, I was called odd, strange, and unusual. I can’t speculate if an earlier diagnosis would have benefited me as a child. Being born in the early 1970’s, high functioning autism and Asperger’s Syndrome were not on anyone’s radar (now all included in Autism Spectrum Disorders). I know that I am not the child of the 70’s that has autism, it just wasn’t diagnosed. People like me were considered freaks, geeks, socially strange. I think if there had been a “label” attached to my behaviors, it might have been easier for me to accept myself as a person. I may have had access to therapy that would have helped with social skills. Maybe society would have been more forgiving. My children have the benefit of a much earlier diagnosis. Although being diagnosed does not solve every one of life’s difficulties. Both of my daughters received ABA therapy as well as occupational therapy. Having both of these therapies at an early age provided earlier skill development than they would have had otherwise. Society is now more readily able to accept autism spectrum disorders. However, because my daughters are higher functioning, they often face unbelief and criticism. People don’t realize that a spectrum encompasses varying levels of ability. Unfortunately, people still think of “Rain Man” when they find out someone is autistic. No, I cannot tell you how many matches you just dropped. People still think autism is a parenting issue. For those of us higher on the spectrum, people often think that behavior issues are related to bad parenting.

What are the benefits/drawbacks of receiving a late diagnosis?

One of the benefits of having a late diagnosis is that I was never labeled by a specific scientific or educational term. I was never boxed into a category. There are some definite drawbacks to receiving a late diagnosis. I was misunderstood as a child. I didn’t understand why I was so different. I was misdiagnosed with OCD as a teen. Being different and having no understanding of your differences leads to depression. Social relationships were incredibly difficult.

How have you had to advocate for your children in school/society?

I have always had to advocate for my daughters since they started school. Due to the fact that they are higher functioning, they too were often mislabeled as behavior problems, having developmental delays, and learning disabled. My daughters were eventually diagnosed by a very knowledgeable developmental pediatrician that specializes in autism spectrum disorders. Even after they were diagnosed, the school district still challenged the diagnosis. I have had to hire educational advocates several times to navigate MDC and IEP meetings. I always tell my daughters’ classroom teachers that my daughters are on the autism spectrum. I teach my daughters autism positivity. The word and the diagnosis should never be feared. My daughters are becoming great self advocates.

What unique challenges and/or advantages do parents on the spectrum experience that NT parents may not?

For one thing, I know exactly what my daughters are thinking and feeling. It’s almost as if I can predict their actions. I think that having the same type of thought patterns has given me a huge advantage that NT parents are not able to access. I also understand how it actually feels to be autistic. I know what it is like to feel like a foreigner in a foreign land. I think being autistic has helped me be a better advocate for my children because I know what I would want or need.

Any guidelines for beginning discussions about autism with children on the spectrum?

I was very matter of fact with my girls about their autism. Shortly after they were diagnosed we started using the word autism on a daily basis. My husband and I decided that we should tell both girls from the start that they are autistic. We told them they were special and had a special gift called autism. At the time of diagnosis, my daughters were 3 and 7. We said they should be proud of who they are and why they were made. Autism should be celebrated. Sure it has its challenges, but everyone has challenges. Autism is your superpower! You see the world in a unique way, unlike anyone else. The word autistic has never been a dirty word in our home. We are proud autistics.

What are some ways people can create a more inclusive environment for autistics within their own homes or communities?

Sensory boxes are one of the easiest things to make. Small sensory boxes can be used in the community at restaurants, movie theaters, or anywhere that individuals with autism frequent. Providing an autism friendly area/space is also a great way to provide inclusion for individuals on the spectrum. A quiet room or space with sensory toys that is inviting can be an easy way for businesses to make safe zones for those with autism. Accept everyone!

Autism advocates often make the mistake of trying to “cure” autism. While their intentions may be admirable, not everyone with autism wants to be cured. Many in the autism community are perfectly happy the way they are. Also, many autism “cures” are dangerous and ineffective. Autism advocates should support positive autism role models. Celebrate the uniqueness of autism. The wonderful talents of those with autism. Focus on positive aspects of living with autism, not cures.

In my home we celebrate our uniqueness as autistics. Autism has never been a dirty word in our home. We focus on our strengths, and work on our challenges. I have taught my daughters to be autism advocates. Be proud of your uniqueness, not ashamed. Everyone is different and that’s what makes us all awesome.

Anything else you’d like to say? Advice for parents/teachers of children on the spectrum?

My advice for parents and teachers is to love each child for who he/she is, not what you want him/her to be or become. It’s often easier said than done. Each child has a unique path to follow in life. Let children learn at their own paces. Don’t try to fit autistic children into a specific mold. It is called a spectrum for a reason. Celebrate each child’s strengths. Teach self advocacy.