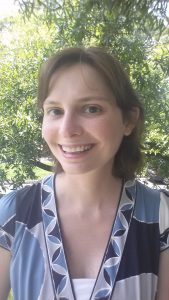 Samantha Crane is the Director of Public Policy at the Autistic Self Advocacy Network’s national office. Samantha graduated from Harvard Law School and served as a staff attorney focusing on enforcing the right to community integration as established by the Supreme Court in Olmstead v. L.C. This week Samantha shared some of her background studying law and how she uses her experience to publicly advocate for others on the spectrum.

How did you first become interested in studying law?

My family always used to joke that I should go to law school because I loved to argue, but what finally convinced me to study law was realizing that it was the best way to make a difference for people with disabilities, especially people with developmental and mental health disabilities. I had originally wanted to become a therapist, but started to realize that I got far more fired up by the idea of fighting discrimination than the idea of being a mental health provider.
That dream of becoming an advocate helped me not only get through Harvard Law School, but also to graduate magna cum laude. I felt like I had to succeed in order to be able to make a difference. But now that I’ve been advocating for a longer time, I’ve found that some of the best advocates have never graduated college. My degree often gives me advantages and privileges, but the most important thing is to always be learning.

What are some ways you’ve learned to self-advocate? Did anyone teach you this, or did you teach yourself?

I’m of the opinion that if you can communicate desire, displeasure, anger, or anything along those lines, then you can self-advocate. By that definition, I was a self-advocate from birth. But of course, people can learn to be better self-advocates and – most importantly – to connect their own experiences to larger public policy issues. That’s one of the things that I work on at ASAN – helping people understand the public policy issues that matter to them so that they can be better advocates. Probably the most important skill, though, is simply refusing to be told to shut up – keep saying your message in as many different ways as you have to, until you find one that works.

Can you describe some of the work you do for ASAN?

I’m the Director of Public Policy at ASAN. It’s my job to track a wide range of public policy issues that affect the autistic community, from health care to community integration, even to Second Amendment rights! Then I work to educate both policymakers and the general public about those issues. On one day, I may be talking to federal government employees about how a particular policy will affect autistic people. On another day, I may be creating materials to educate the autistic community about the same policy.

What are some of the most important ways public spaces can be made more accessible to people on the spectrum?

There are a lot of ways, but often it ends up coming down to sensory accommodations. We often need a place that isn’t noisy, hot, or otherwise overwhelming. Depending on the accommodation, that could be a designated quiet area, or it could be special events that are designed to be less loud than usual. Often, though, even when accommodations do have that sort of place, it’s only available to children. For example, while it’s nice that movie theaters are now offering special screenings of children’s movies, what about those of us who want to watch movies aimed at adults? Sensory needs don’t go away once someone reaches adulthood.

The biggest mistake that a non-autistic advocate can make is not consulting or including autistic advocates, or assuming that there’s a distinction between “self-advocates” and “experts.” Autistic advocates are also often experts! I’ve seen a lot of advocacy events in which there was an entire panel of speakers, and not a single self-advocate. I’ve seen other events in which there was one token self-advocate on the panel, but they were only asked to “share their story” while everyone else was invited to share their expertise or express opinions on policy issues. We ask non-autistic advocates to pay attention to whether or not this is happening and to speak up. If you’re being invited to an event that isn’t accessible to autistic people, or in which there isn’t meaningful autistic participation and leadership, refuse to participate until that changes.

What’s the most important thing parents can do for their children on the spectrum?

Teach your kids that it’s okay to say no. Too many “interventions” aimed at autistic kids are compliance-focused. This makes autistic kids and adults more vulnerable to abuse, less likely to speak up if something is wrong, and less prepared to take a leadership role in their own lives once they reach adulthood. When people feel in control, they are more likely to be motivated to develop the skills they need to be autonomous adults. This means that an autistic kid who’s on the way to becoming a good self-advocate might be a huge pain in the neck. But it’s worth it!
Relatedly, don’t underestimate your kid’s ability to understand how policy issues affect them. Don’t try to shelter them from their diagnosis or from concepts like disability discrimination. I’ve seen lots of autistic people who people said would never be able to self-advocate, but who turned out to be great advocates as soon as people started actually listening to them as equals.