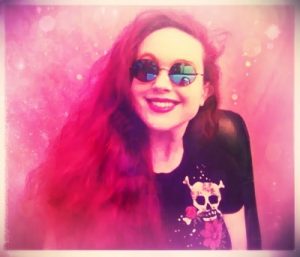 RoAnna Sylver is passionate about stories that give hope, healing and even fun for LGBT, disabled and other marginalized people, and thinks we need a lot more. Aside from writing oddly optimistic dystopia books, RoAnna is an autistic blogger, artist, singer, and voice actor. This week RoAnna discussed her passion for creating neurodivergent characters in her writing.

Your books feature marginalized heroes. Are any of them autistic? Why are your representations important/necessary?

Yes! It’s kind of a funny situation because, since I’m definitely neurodivergent in several ways, I tend to write characters who think the same way. (I recently realized I have never written a protagonist who wasn’t a-spec/asexual in some way, and doesn’t have PTSD. This doesn’t really bother me much.) So even among those who haven’t been confirmed, I think it would be easier to pick out characters who are neurotypical.

One in particular though, who I especially delight in writing, is Anh Minh “Annie” Le—she’s gloriously autistic and doesn’t give a single shit. She has a badass motorcycle, a helmet specially designed to shut out painful light and noise stimuli, and a cool black leather jacket with studs that spell out different words on the back when she goes nonverbal. (All things I wish I had!) She also has EDS, a connective tissue disorder that leads to joints dislocating really easily (which I do have), and wears cool metal braces that end up looking like dystopian armor and… I just really love her.

Mostly because she cares so hard. (Which also ties into her being aromantic and asexual; everybody thinks aro/ace people are emotionless robots too.) Annie loves her friends and found family with every cell in her body, and she’s a direct combat-book face-kick to the idea that autistic people are cold or uncaring, ‘lack of empathy’ aside. (I’ll get into that a little later!)

She’s so important to me to write, and I’ve heard the same from many readers, because what little autistic representation we do get tends to be the same: young white men who do display unfeeling/robotic tendencies, clearly written by people who don’t understand autistic people at all. I want to show that we’re not all the same, and there’s as much variety among us as the rest of the population.

Also… damn, it’s just fun to write her kicking ass and rocking out and being herself, unapologetically. We need that too.

Annie’s one of the main characters of The Lifeline Signal, Book 2 of my hopeful-dystopian series, Chameleon Moon, and first shows up in the short story The Library Ghost in the story collection Life Within Parole, Volume 1.

Do you have a writing process or routine? What is the most difficult part of the writing/publishing process?

Oh boy… I’ve tried to nail down a writing routine, and it never, ever works. Usually I start by staring at a blank page for a half hour (thanks, executive dysfunction), and then, for no discernible reason, I get over whatever mental block is happening, and I’ll write 3,000 words in an hour. No idea how that works, and I’ve been writing for most of my recall-able life.

The most difficult part is definitely pushing past going nonverbal, though. This happens when I’m very tired or overwhelmed, or even feeling an emotion too intensely, even a good one. The best writing is made from the deepest feeling, but when I feel too deeply, I lose the words. I have to keep a degree of detachment, or I’d never get anything done!

Chameleon Moon will always be incredibly important to me, and that’s probably what people know me for best. It’s a very personal story (I share Regan’s anxiety and amnesia experience, as well as PTSD and asexuality), but within that universe… I have a real soft spot for the short stories Runtime and Always Be You.

I also put out a collection of poetry last year, called But Not Up Here. It’s probably one of the most raw and personal things I’ve ever written.

Do you have any projects you are currently working on?

My most recent book is the first in a new series, Stake Sauce (yes, with that spelling/pun-ness), about queer punk vampires in Portland, OR, and the humans who love them. It’s exactly as weird as it sounds, and a fun mix of humor and my usual brand of a tight-knit found family helping each other heal from grief and trauma.

It also has a companion series, Death Masquerade (also a pun! I really like masks~), which shares the same universe and some of the same characters… but set in 19th-century Venice. Less punk, more lesbian vampires and witches, same level of character-driven goodness.

I’m releasing Death Masquerade in segments on Patreon—4 of 6 parts are done so far (plus a bonus opening story), and I’m hoping to release the full book soon after that’s done. Stake Sauce released last Halloween, so maybe sometime around then!

What specific autism misconceptions/assumptions have people had about you?

Definitely the “lack of empathy” thing—more specifically, what it actually means. I’m personally so hyper-empathetic that watching TV shows or reading books that cause secondhand embarrassment can be actually painful! (Don’t even get me started on character suffering or death. I’ve had distress-induced asthma and mast cell attacks because of them, for real.)

But hyper-empathy aside, there’s a difference between empathy and compassion.

Empathy = being able to literally understand or feel what someone else is thinking/feeling, and why.

Compassion = caring about someone else, regardless of whether you understand them or not.

I think when people say “lack of empathy” they mean “lack of compassion,” but it only serves to paint neurodivergent people who do have trouble with empathy as unfeeling monsters. You can have compassion without empathy (and in my experience, even non-empathetic autistic people can be the most compassionate I know), and, yes, empathy without compassion (understanding how someone feels, and simply not caring).

Just because we might not understand a reaction or social expectation—and that definitely does have truth for me anyway—doesn’t mean we don’t care. Sometimes we care too much, but you never see people talk about that.

Not listening to us—so the entire theme of this blog/interview makes me especially happy. In little ways like the insistence on “person first” language despite our objections (when wouldn’t we know what we want to be called?) or wanting us to be “more normal.” I understand wanting to protect your child/relative/friend from an ableist world, but a good way to start is with yourself, and actually listening to them and their individual needs.

I’m honestly really lucky to have parents who do understand me. I live at home because I’m physically disabled and chronically ill as well as neurodivergent, and my mom shares a lot of my conditions. I definitely would not be alive if they didn’t support me in a lot of tangible ways, but emotional support is incredibly important too, and I’m very grateful for how they try to understand my sensitivities and different ways of thinking/feeling/living. My situation is not perfect, but so much better than so many have.

Thank you very much for having me here!