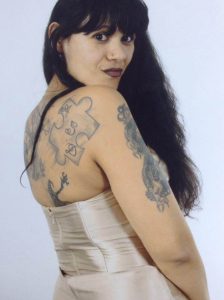 Emma Dalmayne is an Autistic and Autism Advocate and activist from the United Kingdom who speaks out against all Autistic mistreatments. She has published several articles and books aimed at helping individuals on the spectrum, and her advocacy work has been featured in the Guardian. Emma is also a home educator to her children who are also on the Autistic spectrum.

This week Emma shared some of her background growing up on the autism spectrum, her feelings about receiving a late diagnosis, and how she advocates for others on the spectrum today.

What led to your receiving a diagnosis?

After seeing so many similarities between myself and my youngest son I decided to sit down and really think and list all the things that suggested to me that I might be a spectrumite.

I thought back to the alienation I felt in my school days, the way that others just couldn’t understand why I could get hysterically upset over someone stepping on an ant or crushing a snail.

The fact that as much as I would want to make friends I would find it impossibly hard. Understanding the neurotypical mindset was and still is near impossible for me and the love they have of socialising leaves me floored.

The sensory seeking habits I’d developed over the years to help me cope and regulate had become so much a part of me that it was hard to differentiate what was what. I’d always (and still do) bite my mouth to calm myself, and I will always have beads or something to fiddle with in my hand as I shop to block out the external stimulation.

I went to my GP and handed the list over, explaining why I believed I needed to be referred, and I was immediately. Within six months I was diagnosed with Aspergers and Synesthesia, it was a day that I believe set me free.

How did you feel about being diagnosed?

I had always looked for someone, that special someone that would love and care for me, see me through anything….and that day I found that person.

I wasn’t mad, odd or a misfit…I am an autistic woman and the person who had always been there, who had brought me through, cared for my children and rallied against a world that seems at war against my senses and ideals.

I’d coped with so much, never knowing others didn’t see things the same as me, never understanding why they didn’t.

I am immensely proud of myself that I have come this far.

What challenges did you experience as a result of not having a diagnosis when you were younger?

I believe if I had been diagnosed when I was younger it would have held me back in some ways. I am forty, and I was diagnosed at 37.

My recollection of my childhood leads me to believe in some ways it would have been a good thing, more support possibly? But I was and am a day dreamer and like things my own ways (many Autistic’s do)….would I have been forced to comply? Make eye contact which burns and be made to cast away my fantasy world I had weaved around myself as a protective shield?

I was bullied consistently, maybe some support would have helped with that? Who knows?

How early were your children diagnosed?

My youngest son was diagnosed at age four. My eldest son and seventeen-year-old daughter have both been referred to be assessed as has my youngest who is three.

What advantages do you have over neurotypicals in supporting your children on the spectrum as an autistic adult?

I believe any parent, be it neurotypical or autistic, has the ability to be an amazing and caring influence in their child’s life, but I will say that if my youngest is overwhelmed because the Tarmac suddenly changed to pavement, I can empathise.

I can understand fully why one of my children sensory seeks with feces as I used to when I was younger…it’s all about tactile feedback, but, moreover, it’s about control, the one thing they can control when all else to them is chaos.

I know I can put myself in their shoes as I was them.

I have commonly seen advocates alienate neurotypical parents by attacking them on their choices for their children.

We will get nowhere like that. They need to be educated and given the choice to listen to us willingly.

What is one thing you wish your parents (or teachers) would have done differently when you were young?

I wish so much that just one teacher would have asked ‘why?’ Just why did I smash up a classroom? Why did I pass so well in every English assignment yet fail so dismally in math? And just one…just one to help with the bullying I experienced would have been great.

What’s your opinion on the neurodiversity movement? How can parents take advantage of its current popularity?

The neurodiversity movement is getting stronger, but we need more.

We need more Autistics standing up and campaigning against the so called ‘cure’ treatments that are being pushed at parents who know no better.

The parents who have been led to believe that in order for their children to thrive they must ‘fit in’. They must do ABA, they must be the same as their neurotypical peers.

We need these parents to look to strong autistic people to realise that their children are not damaged nor broken, not ill nor injured.

They are autistic not ‘with autism,’ and as the movement gets stronger and gains momentum, I believe more will take note.

How are the books you’ve written about autism different from others that are available today? Or what do they contribute to the public conversation about autism?

My books are different to others on the market in one way…’It’s An Autism Thing’ is from my perspective and gives accounts of my experiences of Meltdowns, Sensory overloads and Sensory needs.

I wrote it to help people who had no knowledge of how an autistic person feels step over the fence into our shoes.

Susie Spins is from the angle that Susie, who is autistic and pre verbal, is not the one who’s different in her school. The other children are, but that does not make them less.

It’s a little book to educate children that although a classmate may communicate in a different way, they still have hopes, dreams, and opinions; they are still a worthy friend; and they are still someone to learn from.

Check out her books: