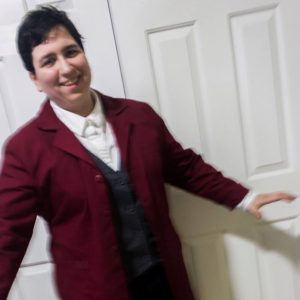 Courtney Johnson is a writer, public speaker, and Chemistry Ph.D Candidate on the autism spectrum. Courtney is a professional speaker on topics related to her experience with autism, inspiring her audience to achieve at higher levels. She also manages the website AutismAchiever.com, where her goal is to share information she has learned through her varied life experiences to help individuals on the spectrum reach their full potential. This week Courtney shared some of her personal experiences growing up on the spectrum. Visit us next week to hear her discuss her advocacy work and how parents can best advocate for their children.

Your website mentions that you were nonverbal at age 3 and underwent intensive ST, PT, and OT as a child. At what age did you begin speaking? What do you remember about the struggles you faced in your early childhood years?

While delayed speech was a cause for my mom to seek diagnosis, I had begun speaking at 3 between diagnosis and speech therapy. The reason I was in speech therapy was because when I did speak, it was abnormal. I did not speak in full sentences, and would mostly repeat things I heard on television. The thing about being that young is you don’t have a concept of social normalcy (or at least I didn’t). The only thing that really stuck out at the time was that I needed the teacher’s help for tasks other kids did not. Even after OT, PT, and Speech, I still had difficulties with coordination tasks, so I couldn’t tie my own shoes until 6 or zip my own jacket until 7–I needed the teacher to help me. In elementary school, I was bullied basically every day. I would be called “fat,” “retard,” “weirdo,” and they would put tape in my hair. Going into puberty was tough because meltdowns became more frequent and aggressive, and I didn’t have any outlet to release the energy that fueled them, which is why practicing what I call “energy management” is an important, under-discussed topic I’ll be writing about on my site.

You’ve mentioned that you struggled in high school and during your undergraduate years. What was most difficult about this time?

The most difficult aspects of high school and college were the uncertainty and lack of motivation. I had no idea what I wanted to do with my life or where I was going to go. I had never been encouraged by anyone to work harder since I was doing “good enough” in school. Nobody ever pushed me to strive for more. I was never encouraged to take AP classes or to aim for an Ivy-tier university. At the time, this was complicated by the fact that I did not want to do things that were difficult and did not appreciate the value of hard work. I was suffering from what Psychologist Carol Dweck calls a “fixed mindset”, where you take intelligence to be a fixed attribute. If you are struggling with, for example, algebra, then you assume that you’re struggling because it’s a subject for “smart people” who are “naturally good at” the subject instead of learning to persist through the hardship. I was disappointed to find that Temple Grandin took this stance on Algebra as well, considering how important and empowering learning algebra was for me later even though I had struggled with it in high school. I’d love to have a debate with her about this and change her mind!

College was the same problem. When I envisioned different majors, they all landed in three categories: too hard, required math, or boring. So I took the easiest classes possible, and while I had a 4.0 GPA, I was terrified about my future because the closest I came to anything was a degree in psychology, and I wasn’t thrilled with the job prospects that brought. I realized that to pay off my mounting student debt, I would need to find a major that paid: that meant something medical. I began to expose myself to increasingly more difficult classes, and that was what led me kicking and screaming into taking Introduction to Chemistry- a subject I literally knew nothing about and was certain I would hate. I had no idea how wrong I was about to become.

Was there a defining moment when you gained confidence to achieve at the academic/social/emotional level you are currently at? Or was it an accumulation of experiences?

The single biggest turning point in my life was when I struggled to learn the quadratic equation.  Really!

I had fallen in love with Introduction to Chemistry, and had a huge amount of regret because I had finally found the subject I would have loved to major in, but it was too late. It would take 8 years as an undergraduate by the time I graduated with a B.S. in Chemistry, I would run out of financial aid years before that, and I could never learn Calculus; I was certain my dream was impossible. I had been managing to scrape by in General Chemistry with my extremely limited math ability a day at a time, picking up bits of how to rearrange algebraic equations on a need-to-know basis. But at some point, it’s not enough. That point came on a Thursday morning when discussing how to solve a quadratic equation. I had never seen one before, only heard about them, and I couldn’t even condense the equations enough to even come close to a proper quadratic form. I was absolutely terrified watching my professor go through the problems.

I went to my professor’s office hours, shaky and sweating with math anxiety. He worked with me on step-by-step algebra basics for over an hour. I was trying hard not to cry, to hold in my level of fear, and slowly I began to get it. In a moment of absolute clarity, I had a revelation: f I can learn this math I’ve been running away from for years, maybe I really can learn calculus. Maybe I could actually pull this off and major in Chemistry. Then I could go on, get my Ph.D., become a professor and teach other people like me who didn’t know they could do these types of things.” I had a resolve, and become more determined than I’ve ever felt in my life to earn my degree. I promised my professor in that moment “whatever it takes, I will find a way. I don’t care if I have to head-butt my way through a brick wall…. I will find a way” and despite not using it in years, because of what it means to me, I will never forget the formula of the quadratic equation. “Negative b, plus/minus the square root of b-squared minus 4 ac all over 2 a”. The next Monday morning, I changed my major to Chemistry.

Further development came two years later, when I discovered the work of Mark Divine and also the GORUCK Challenge. Mark’s books The Way of the SEAL and 8 Weeks to SEALFIT really provided a framework to improve my level of mental and physical toughness. I had always been inspired by the indomitable spirit of warriors, so I loved seeing the mental framework of warriors applied to success. His talk about the discovery of KOKORO or “warrior spirit” through extreme challenges made me curious. As a result, I also discovered the GORUCK Challenge: a different crucible event run by Army Special Forces veterans which involves tough physical and mental training. At the same time, I began to exercise regularly for the very first time in my life, and six weeks later completed the 6-hour GORUCK Light Challenge, which, at the time, was literally the hardest thing I had ever done. Two years later, I have completed 4 more Light events and 2 of the 12-hour, 20-mile GORUCK Tough Challenges.

The exposure to these warrior training concepts are what built my mental toughness to a level where I was able to say “even if it’s hard, I will find a way to accomplish the mission” and kept me in the habit of pursuing difficult goals. They gave me the confidence to apply to top schools, and, as a result, I had the great opportunity to attend Duke University for my Ph.D. and take the leap into building microscopes.

How did your parents, teachers, or peers help you develop a positive autistic identity?

I was fortunate to have a mom who always accepted me for who I was. I also went to an amazing college (Texas Woman’s University) where the Chemistry Department was a very tight-knit group. It was my first time being able to make actual friends, made easier by the fact that we were all chemists. Because of this, I was in an accepting social environment which became my safe-space to practice being social, and, to be honest, I never really felt the need to tell anyone I was autistic because it wasn’t relevant because everyone accepted me for who I was, so there was no need to explain.